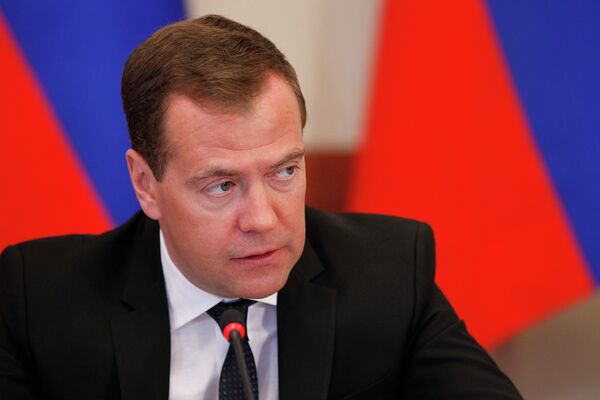 Russia’s Prime Minister Dmitry Medvedev called on the country’s defense industry on Wednesday to provide the military with state-of-the-art weapons superior to their Western analogs.

MOSCOW, May 22 (RIA Novosti) – Russia’s Prime Minister Dmitry Medvedev called on the country’s defense industry on Wednesday to provide the military with state-of-the-art weapons superior to their Western analogs.

“It is essential to offer weapons which are superior to our world counterparts, and pay special attention to strengthening cooperation, primarily with our partners in the Collective Security Treaty Organization (CSTO),” Medvedev said.

Medvedev made his appeal on the day Russia marks the 60th anniversary of the foundation of the country’s system of military and technical cooperation with foreign states.

Russia’s arms industry has enjoyed considerable success in recent years, taking the country to the top of the world’s weapons exporters, he said.

“A huge job has been done, which has allowed this country to reach the top in arms and military equipment exports, and significantly enlarging the product range supplied and the foreign customer base,” he said.

Putin also said Russia currently supplies arms and military equipment to 66 countries, has concluded agreements on military and technical cooperation with 85 countries and its portfolio of orders for defense-related products currently stands at $46.3 billion.

India remains Russia’s largest customer for weapons, buying 80 percent of its military hardware from Moscow, according to Independent Military Review.

While Russia’s performance as an exporter has improved, the arms industry’s performance at home has not always been so impressive. Dmitry Rogozin, who oversees the industry, has repeatedly criticized the sector for delivering weapons late and over-cost, and for corruption within management.

President Putin appointed a new boss at the state-owned United Shipbuilding Corporation on Tuesday with a brief to sort out late delivery of warships to the navy.