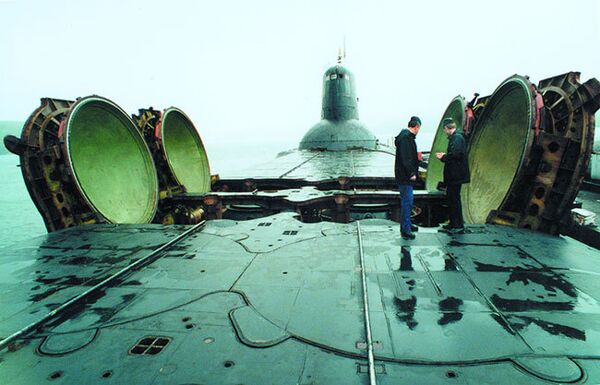 Russia will decommission and scrap two of the largest submarines in the world by 2018, a defense industry source told RIA Novosti on Tuesday.

MOSCOW, May 21 (RIA Novosti) - Russia will decommission and scrap two of the largest submarines in the world by 2018, a defense industry source told RIA Novosti on Tuesday.

The Severstal and the Arkhangelsk, both Project 841 (Typhoon-class) ballistic-missile submarines, based at Severodvinsk on the White Sea, will be withdrawn from the Navy by the end of this year and will begin to be dismantled.

“This process is to be completed before 2018-2020 at the latest,” the source said, adding the boats are outdated and it is too costly to modernize them.

A third submarine of this class, the Dmitry Donskoy, has been modernized as a test platform for Russia's new Bulava submarine-launched ballistic missile, and will remain in service in that capacity for some time yet, the source said.

Six Typhoon-class submarines entered service with the Soviet Navy in the 1980s, and remain the largest submarines ever built. Three have already been scrapped.

The Typhoon class boats have a maximum displacement of 33,800 tons and were built to carry 20 SS-N-20 SLBMs, all of which have been retired.

They are to be replaced with new Borey-class strategic submarines, armed with Bulava missiles.