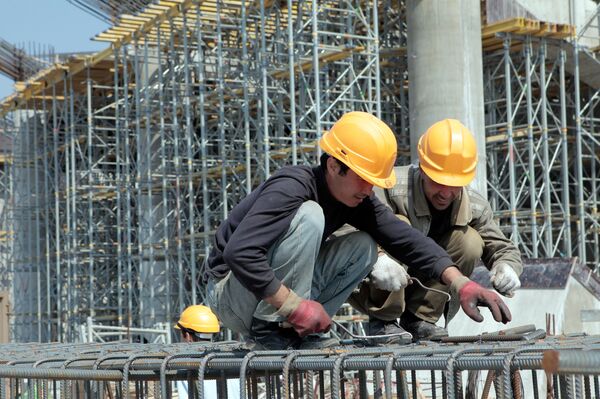 ST. PETERSBURG, May 20 (R-Sport) - St. Petersburg's vice governor responsible for construction on Monday denied claims by Russia's federal Audit Chamber that the city's 2018 World Cup football stadium might not be complete until 2017.

Audit Chamber head Sergei Stepashin said earlier on Monday that the best-case scenario is for construction of the $1.1 billion arena to be finished in late 2016 or early 2017 because the city has failed to take into account unspecified "operational decisions" and that damp might have set in through parts of the stadium already constructed.

But Marat Oganesyan stuck to the projected completion date of 2015, with the opening set for 2016, after approval from Russia's construction oversight agency and world football's governing body FIFA.
"In 2016 commissioning work will be carried out so the arena can come online," Oganesyan said in comments relayed by a St. Petersburg government spokesperson.

In March, St. Petersburg’s city construction committee cut its cost estimate from $1.3 billion, which had put the troubled arena in line to overtake London’s Wembley as the world’s most expensive. Stepashin said this should be treated as a success for his auditing operation.

“We’ve reduced the cost of the stadium, but it’s like Wembley, it’s very expensive,” he said. Like the St. Petersburg construction committee, Stepashin did not say how exactly the money had been saved. The revised figure remains almost three times the project’s original budget.

The stadium started construction in 2007 and was originally supposed to open in 2008. It has faced a litany of problems, including a partial redesign to comply with by FIFA’s World Cup specifications. The latest plans for the arena were rejected last month by Russia’s federal agency for major infrastructure projects, citing design changes.

A criminal investigation is under way into alleged fraud on the project after Russia’s Investigative Committee said costs could have been overstated by $16.5 million.

Auditors said in March they had also found $4.9 million in “unnecessary costs” and a further $9.2 million spent on unusable seats.

In the same month, a builder was killed at the site after being struck by a falling piece of metal, and prosecutors filed 15 charges against a company that they said had employed illegal immigrants on the project.