US Ready to ‘Rumble’ with Iran, Russia 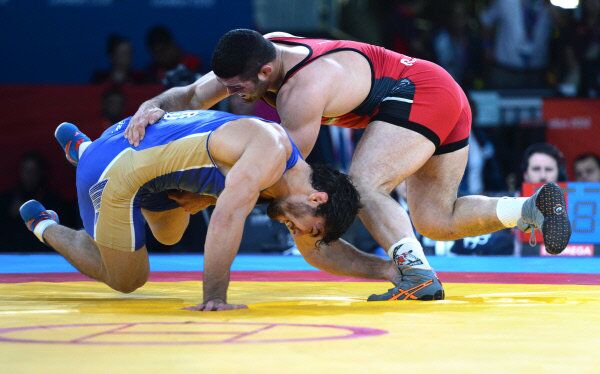 The United States has wrestled with Russia over the war in Syria, missile defense, human rights and adoptions. Both countries have wrestled with Iran over its nuclear ambitions.

WASHINGTON, May 15 (RIA Novosti) – The United States has wrestled with Russia over the war in Syria, missile defense, human rights and adoptions. Both countries have wrestled with Iran over its nuclear ambitions.

Now the three nations are wrestling… just to wrestle, in a rare partnership designed to convince the International Olympic Committee (IOC) not to eliminate wrestling from the 2020 Summer Olympic Games.

“The Rumble on the Rails” takes place Wednesday when the US wrestling team battles Iran in one match and then Russia at New York’s historic Grand Central Station.

‘Rumble’ is part international exhibition and part charitable fundraiser, but the focus is on whether the IOC will be watching – and perhaps, reconsidering its unexpected recommendation to scrap Olympic wrestling.

In February the IOC’s executive board recommended that wrestling not be included in the 2020 Summer Olympics, a move that would eliminate a sport that has endured from the ancient Olympic Games through every modern Olympic competition since the movement’s revival in 1896.

“It became very evident to us immediately that this decision proved one thing: our international federation needed some help. Not just from the Americans, but from the Iranians, the Russians, from wrestling countries all over the world,” said USA Wrestling Executive Director Rich Bender in a statement.

The result, he said, is that “some of the best wrestling nations in the world will compete on one of the most unique stages in the history of the sport, for a unique purpose, which is to maintain our presence on the Olympic program.”

There are eight sports vying for one slot in the 2020 Summer Games. The IOC board meets in Russia May 29 to determine a short list of sports that could be chosen, with a final decision expected in September.

“The three strongest teams in the world, the USA, Russia and Iran, will come together to battle and to show the world that wrestling is not only part of sports but a very important part of life for a lot of people,” said Russian Team Leader Christakis Alexandridis in a statement.