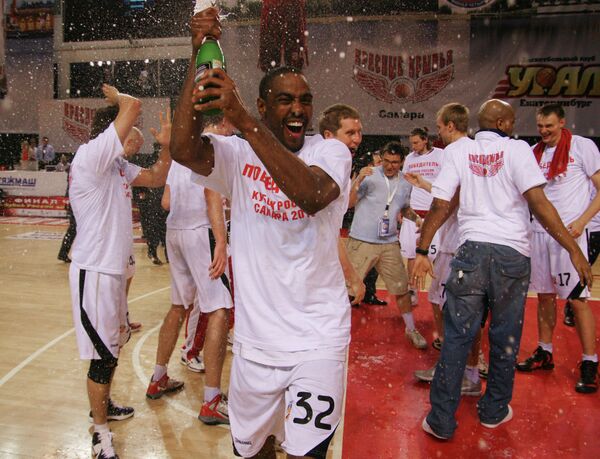 Krasnye Krylya Samara took their maiden European trophy with a 77-76 win over Turkish team Pinar Karsiyaka in the final of the third-tier tournament EuroChallenge.

The Russian team pulled out an impressive comeback from 17 points down in the third quarter, led by Final Four MVP Chester Simmons, who top scored with 18 points, and veteran guard DeJuan Collins who added another 17 in the second half.

“It’s a great feeling, I can’t describe it right now, I’m still in shock,” Simmons said on the competition's website. “Basically, we just stick together, we’ve been down before against bigger teams, so the main thing was to stay focused and play good defense and knock down shots. It was a nail-biter, but we won it.”

Krasnye Krylya was founded only in 2009, after its predecessor CSK VVS went bankrupt, and had played in the EuroChallenge final in 2010, losing 83-75 to Germany's BC Gottingen.

Earlier, this month Krasnye Krylya also won the Russian Cup for the second time in their history.

The team wins the right to represent Russia in the Eurocup, the second most important European competition, next season for the second time after failing to pass the group stage in 2010-2011.