Russia to Complete Helicopter Deliveries to Brazil in Fall 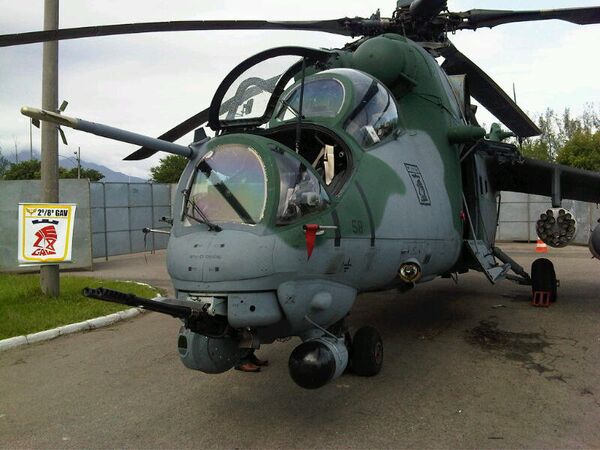 Russia will complete the delivery to Brazil of 12 Mi-35 (AH-2 Sabre) attack helicopters worth $150 million by this fall, the head of the Federal Service for Military-Technical Cooperation (FSMTC) said on Wednesday.

RIO DE JANEIRO, April 10 (RIA Novosti) – Russia will complete the delivery to Brazil of 12 Mi-35 (AH-2 Sabre) attack helicopters worth $150 million by this fall, the head of the Federal Service for Military-Technical Cooperation (FSMTC) said on Wednesday.
“As of today, nine helicopters have been delivered and the remaining three will be shipped in the fall,” FSMTC director Alexander Fomin said at the LAAD 2013 defense exhibition in Rio de Janeiro.
The Mi-35M is an export version of the Mi-24 Hind that was used extensively in the Soviet war in Afghanistan. The Mi-24/35 is unique among dedicated attack helicopters insofar as it can carry troops, in addition to performing its attack role. Brazil signed the contract to purchase the helicopters back in 2008.
The Sao Paulo-based newspaper Valor Economico previously reported that the Mi-35s would be used in the Amazon region, in conjunction with Brazil's Embraer land and ground surveillance jets.
The Amazon region borders both Venezuela and Colombia, and is a prime location for transnational narco-terrorists and drug traffickers.
Fomin also said on Wednesday Russia has decided to deliver Pantsir surface-to-air missile systems to Brazil.
Brazil’s Defense Ministry said last month it wanted to buy three batteries of Pantsir-S1 missiles and two batteries of Igla missiles.
The Pantsir-S, produced by Russia's KBP, is a gun-missile system combining a wheeled vehicle mounting a fire-control radar and electro-optical sensor, two 30-mm cannons and up to 12 57E6 radio-command guided short-range missiles, and is designed to take on a variety of targets flying at low altitudes.
The Pantsir can engage targets up to 20 km (12 miles) by missiles and 4 km (2.5 miles) using cannons, KBP claims.
The export version of the system, Pantsir-S1, has been sold to the United Arab Emirates, Syria and Algeria.
The Igla is a Russian man-portable infrared homing surface-to-air missile.
Russian state-owned defense firm Rosoboronexport said on Monday that Russia and Brazil would discuss the possibility of the joint development of an advanced surface-to-air missile system, Parana.
The LAAD 2013 International Defense and Security International Exhibition opened on April 9 and runs through April 12. Rosoboronexport is showcasing more than 200 models of Russian arms and military equipment for all branches of service there.