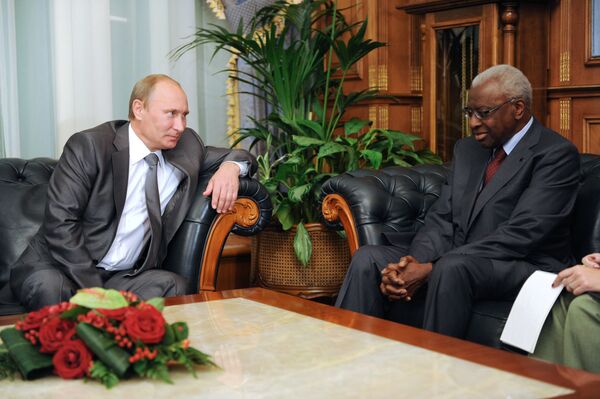 The International Association of Athletics Federation criticized Russian government officials – including President Vladimir Putin and Prime Minister Dmitry Medvedev – Friday for failing to adequately promote this year’s world championships, which will be held in Moscow in mid-August.

MOSCOW, April 5 (R-Sport) – The International Association of Athletics Federation criticized Russian government officials – including President Vladimir Putin and Prime Minister Dmitry Medvedev – Friday for failing to adequately promote this year’s world championships, which will be held in Moscow in mid-August.

In a meeting at Moscow city hall with Mayor Sergei Sobyanin, IAAF president Lamine Diack said he’s noticed a dearth of television commercials advertising the world championships, compared with the number touting the upcoming University Games, in Kazan, and the Sochi 2014 Winter Olympics next February.

“I’ve seen a lot of references to the Universiade,” Diack said of the mid-July event. “And when I was at a sports forum in Kazan, President Vladimir Putin and Prime Minister Dmitry Medvedev only talked about Kazan and Sochi.”

Diack said he pointed out to Putin and Medvedev that the Moscow championships, which run August 10-18 at Luzhniki Stadium, are about a month after the Universiade and well before the Olympics.

“To successfully host a competition, you need to advertise,” Diack said he told Russia’s leaders. “You should make every Muscovite know that on August 10 you can come to Luzhniki.”

IAAF vice-president Sergei Bubka said last month that the championships will be a failure if Luzhniki is not full; Russian organizers are planning to shrink the stadium’s 90,000-seat capacity to 50,000. But the country’s athletics chief, Sergei Balakhnichev, told R-Sport last month he fears thousands of tickets will go unsold, casting a pall over the games, for which the IAAF expects a TV audience of six billion.

Sobyanin, for his part, assured Diack organizers will boost advertising in the run-up to the biennial event, which regularly draws many of the world’s top amateur track-and-field athletes. Organizers failed to land superstar sprinter Usain Bolt for a promotional video after the Jamaican set his asking price too high.

Sobyanin said 23,000 tickets have already been sold. More than 400,000 fans attended the 2011 championships in Daegu, South Korea, the Yonhap news agency reported at the time.