Michigan to Take Over Detroit’s Finances 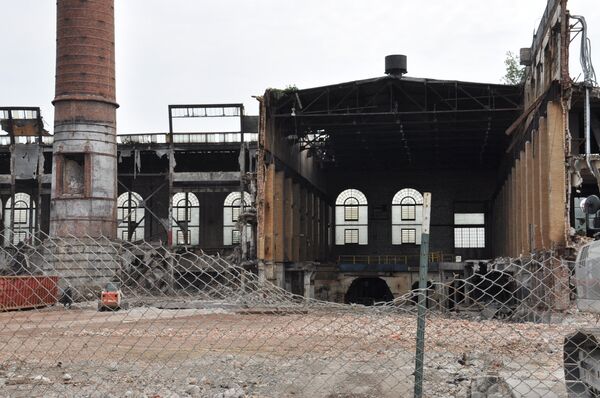 © RIA Novosti . Larisa Saenko
Subscribe
The once-booming city of Detroit became the largest city in United States history to be taken over by its home state, when Michigan Governor Rick Snyder on Thursday appointed an emergency manager to oversee Detroit’s finances to try and avoid bankruptcy.

WASHINGTON, March 14 (By Maria Young for RIA Novosti) - The once-booming city of Detroit became the largest city in United States history to be taken over by its home state, when Michigan Governor Rick Snyder on Thursday appointed an emergency manager to oversee Detroit’s finances to try and avoid bankruptcy.

“This is about a situation that’s been evolving for 50-plus years, and now has reached a true crisis point, so in many respects it’s a sad day… but it’s also an opportunity,” said Snyder.

“It’s not about asking anyone to step aside, it’s about saying ‘all hands on deck,’” he added.

Shortly after the governor’s announcement, the Michigan Loan Board approved his choice of Washington lawyer Kevyn Orr to become Detroit’s emergency financial manager.

Orr is a University of Michigan graduate who worked on Chrysler’s 2009 bankruptcy restructuring.

Thursday’s takeover underscores just how far Detroit has fallen in recent years, a city that was once the center of the US auto industry and the birthplace of Motown music.

It is the poorest major city in the United States, plagued with problems as it struggles to provide consistent, basic services like garbage pickup, security, even streetlights in some areas.

The emergency financial appointment takes the power to run the city out of the hands of elected officials in Detroit and gives Orr tremendous authority to make tough financial choices without political considerations that could bog the process down.

“This is a very hard decision the governor had to make, it’s always politically controversial to have the government intervene in this way, but it is the right decision to get Detroit back on its feet,” said Bruce Katz, vice president of the Brookings Institution, a nonprofit public policy organization, and co-director of its Metropolitan Policy Program, in an interview with RIA Novosti.

As populations shift across the United States, he said, it’s a problem of “downsizing” many cities would struggle to handle.

But Detroit’s complex downfall can also be traced to decades of mismanagement, said the governor, and a lack of willingness among city leaders to make what he called the “tough decisions.”

As jobs and people departed, the population dropped from a peak of two million people in the 1950s to just 700,000 today.

A third of Detroit’s population is officially classified as living in poverty, unemployment stands at 18.2 percent, according to the Department of Labor, and the city has a mountain of debt as high as $12 billion by some estimates.

“When I had a chance to look at the books it was clear Detroit was in financial crisis, and as you continued to peel back the onion, it was out of neglect over the last 40 or 50 years,” said Mayor Dave Bing.

The problems have been compounded in recent years by extensive corruption in city government.

Former Mayor Kwame Kilpatrick was convicted Monday of 24 criminal counts including racketeering, mail fraud and extortion, in a scheme prosecutors said was run from City Hall.

A move like the financial takeover announced Thursday has historically been an effective way to get a city back on its feet, said Katz.

One of the most notable takeovers of a US city government was in Washington, DC. The nation’s capital was temporarily taken over by the federal government in 1995, a move former mayor Marion Barry once called “a rape of democracy.”

“DC was a completely dysfunctional city at its core, and the most basic transactions you had with government were nightmarish and now they’ve been sped up, they’re enabled by technology, it is night and day and citizens across a broad spectrum of income levels have benefited,” said Katz.

With the right oversight and fiscal management, the same thing will happen in Detroit, he said.

Orr called the monumental task that lies before him the “Olympics of restructuring,” but invoking the city’s Latin motto, he added, “We can rise from the ashes.”