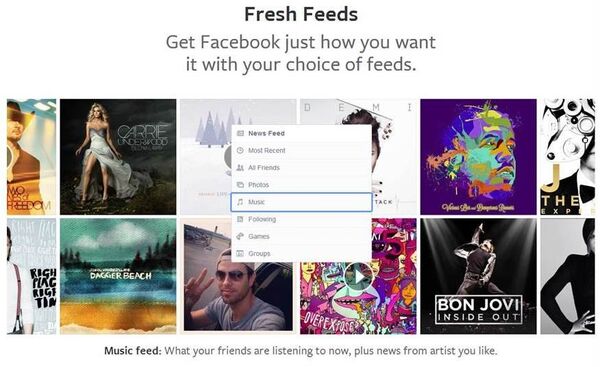 © Facebook
Subscribe
Social networking giant Facebook announced Thursday a major overhaul to its homepage known as the News Feed, unveiling a more visually stimulating stream of photos, videos and comments posted by friends that will also let users see more of the topics they are most interested in.

WASHINGTON, March 7 (RIA Novosti) Social networking giant Facebook announced Thursday a major overhaul to its homepage known as the News Feed, unveiling a more visually stimulating stream of photos, videos and comments posted by friends that will also let users see more of the topics they are most interested in.

“We want to give everyone in the world the best personalized newspaper we can,” said Facebook founder and CEO Mark Zuckerberg at a news conference announcing the changes.

“This design reflects the evolving face of the News Feed,” Zuckerberg said, describing the new multifaceted focus on vivid visuals, giving users more of a choice on what they see in their feeds, and creating a consistent look across mobile and desktop versions of the site.

The redesign puts photos front and center, which is not surprising according to industry experts, with Facebook’s recent acquisition of the photo sharing service Instagram.

“The types of stories that we tell when we communicate with a photo as opposed to text are completely different,” Zuckerberg said on stage at the company’s California headquarters.

Other changes to the News Feed include a division into sections, with separate tabs that can be used to view photographs, music, or posts coming from brand and celebrity pages users follow.

Facebook’s team said this change will be welcomed by some users who have complained of being bogged down with a seemingly endless stream of unimportant content.

“In our new design we are giving these images and rich visuals lots of prominence,” said Facebook Director of Design Julie Zhuo at the news conference.

While company executives have said the redesign has been in the works for some time, the unveiling comes on the heels of a Pew study released last month that found 61 percent of Facebook’s more than one billion active users have taken a hiatus from the site due to reasons such as boredom or too much irrelevant information.

The redesign does not, however, affect the filtering algorithm that Facebook uses to select what shows up on a user’s feed.

“You see all the stories you saw in your News Feed before, but with a fresh new look,” said Vadim Lavrusik, Facebook’s Journalism Program Manager in a post on the site.

“We've completely rebuilt each story to be much more vibrant and colorful and highlight the content that your friends are sharing. Photos, news articles, maps and events all look brighter and more beautiful,” Lavrusik said.

Facebook said it will begin rolling out the new News Feed immediately, but on a limited basis, so it can get feedback and make changes. Mobile versions will be released in the coming weeks.

Facebook first introduced the News Feed in 2006. The facelift marks the first major redesign to the feature since September 2011.