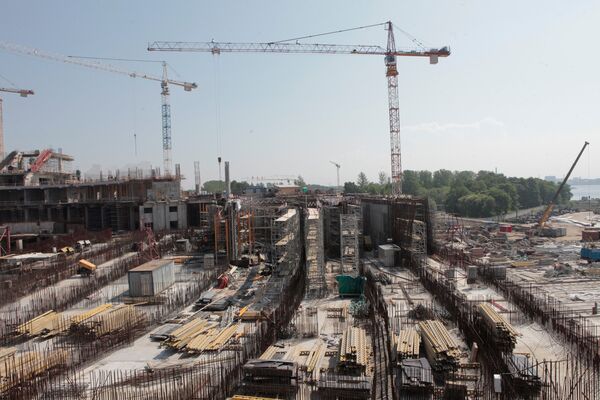 The unnamed man is the third worker to die at a World Cup 2018 arena in the last six months.

“According to preliminary findings, while undertaking work to lift a fitting, a break occurred in the securing rope, causing the fitting to fall and hit the deceased, as a result of which the man died,” investigators said in a statement.

The man died at the scene, investigators said. There was no word on his identity.

Investigators said the incident took place Saturday and did not divulge why it was not made public until Monday. They are now looking into whether a crime was committed in connection with the man's death.

In November, a 25-year-old construction worker was killed at the site of the future World Cup stadium in Kazan when a crane collapsed, and in October a 48-year-old builder died in a fall while working on Spartak Moscow’s new stadium, also a 2018 venue.

The arena was originally due to open in 2008 and could surpass London’s Wembley for the title of the most expensive football stadium in history after estimated costs rose to $1.3 billion.

It is officially scheduled to open next year, but Zenit's general director Maxim Mitrofanov told R-Sport last month that "there is not a single indication that the stadium will be built in the specified time."

The outer shell of the building has not yet been completed and a retractable roof must also be installed.

The arena is also at the center of a fraud probe being carried out by St. Petersburg prosecutors.

The stadium was designed to look like a spaceship by Japanese architect Kisho Kurosawa, who died in 2007.