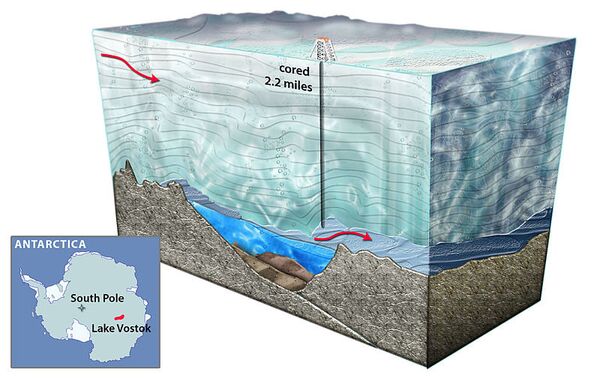 Russian researchers have successfully obtained ice samples from the ancient Lake Vostok in the Antarctic, but said on Friday it would take months to clarify whether life exists in the fossil water below the 3.5-kilometer (2.2 mile) high glacier.

MOSCOW, March 1 (Alexey Eremenko, RIA Novosti) – Russian researchers have successfully obtained ice samples from the ancient Lake Vostok in the Antarctic, but said on Friday it would take months to clarify whether life exists in the fossil water below the 3.5-kilometer (2.2 mile) high glacier.

The ice samples are currently on the research vessel Akademik Fyodorov, which will return to St. Petersburg from the Southern hemisphere in May, Lipenkov said. Analysis of the samples will then start, with results published in late 2013 or early next year, he said.

Lake Vostok, the largest subglacial lake in the Antarctic, may contain unique microscopic lifeforms that evolved after it was isolated from the outside world by the ice sheet 18 million years ago, Lipenkov said at a conference in St. Petersburg, broadcast to Moscow via videolink.

Russian researchers have been drilling to reach the lake since 1995, completing the borehole last year. However, the drilling season is short due to the harsh weather conditions in the area – Lake Vostok is situated at the southern Pole of Cold – and the research team was only able to collect samples of surface water from the lake that froze in the borehole in January 2013.

No lifeforms are currently known which would be capable of surviving in environment such as in the Lake Vostok, where the concentration of oxygen is 50 times higher than in ordinary water, Lipenkov said.

Preliminary analysis of early samples of surface water from the lake, published late last year, found no traces of any unique bacteria. But microorganisms may be living closer to the bottom, next to thermal springs which may be there, Lipenkov said.

The next step in the research will be obtaining water samples from below the surface of the lake, which has an average depth of more than 300 meters (980 feet), and then drill for bottom sediments, said drilling expert Nikolai Vasilyev.

That task will be harder than obtaining samples of lunar and Martian soil, said Vasilyev, a researcher with the National Mineral Resources University in St. Petersburg, which oversees the drilling operations at Lake Vostok.

The expedition at Russia’s Vostok Station above the lake was cleared by the international Committee for Environmental Protection to continue its research through 2018, said Valery Lukin, the head of the Russian Antarctic Expedition.

Russia allotted about 1.1 billion rubles ($35 million) to support Antarctic research in 2012, with 465 million rubles ($15 million) of that sum spent on Vostok Station, Lukin said at the conference.

The station, established in 1957, is one of five Russian year-round bases in the Antarctic. It is tentatively scheduled for a major revamp of its facilities starting 2014, Lukin said.

The Antarctic remains one of the least explored places on the planet, and as such, continues to thrill researchers and explorers. Caving in to temptation, even Russian President Vladimir Putin – known for his flamboyant exploits such as flying with migratory birds in a hang-glider and diving to the bottom of Lake Baikal in a submersible – announced in January plans to tour Russia’s stations on the southern continent sometime in 2013.

Some theories about the mysteries of the Antarctic are quite far-fetched: An oft-cited story claims a secret Nazi base was established there in 1943 to store Hitler’s secret files and DNA for cloning purposes. The story was never confirmed by historians, but continues to thrill conspiracy theorists.

The real mysteries of the Antarctic have to do with life under extreme conditions, which are similar to those found outside the Earth, Lukin said. Jupiter’s moon Europa is believed to house an ocean of liquid water under an outer core of ice, similar to Lake Vostok – and if the latter proves to contain life, this may imply similar discoveries on Europa.

“I’d compare it to space research,” Lukin said of Antarctic exploration. “Understanding of the subglacial environment expands human knowledge, the same as studying other objects of the Solar System.”