BlackBerry Fighting for Smartphone Relevance in US 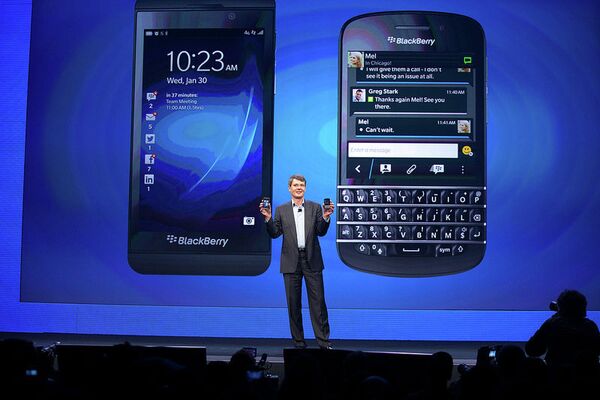 © Photo : courtesy BlackBerry
Subscribe
Despite the recent buzz surrounding the launch of its newest smartphone - its first in nearly two years - BlackBerry, the company formerly known as Research in Motion (RIM), is struggling to gain tracti­­­­on in the Apple dominated smartphone market in the United States.

WASHINGTON, February 13 (By Sasha Horne for RIA Novosti) Despite the recent buzz surrounding the launch of its newest smartphone - its first in nearly two years - BlackBerry, the company formerly known as Research in Motion (RIM), is struggling to gain tracti­­­­on in the Apple dominated smartphone market in the United States.

“People believed BlackBerry 10 could be a big innovation,” Trip Chowdhry, managing director of equity research at the California-based Global Equities Research firm, told RIA Novosti in reference to the January 30 release of its latest 10-series device.

And it was those hopes of innovation; Chowdhry said that pushed BlackBerry’s stock up in the days leading up to the launch of the BlackBerry Z10 touch-screen smartphone.

But just days after the release came a slew of mixed reviews, and BlackBerry shares took a downward turn.

“When investors saw the product, it just wasn’t groundbreaking,” said Chowdhry, resulting in its shareholders pulling out their money.

On the heels of the Z10’s disappointing launch, on Monday BlackBerry was dealt yet another blow.

US home improvement retail giant Home Depot announced plans to ditch BlackBerry and instead provide its approximately 10,000 executives and managers with Apple’s iPhone.

To add insult to injury, also on Monday, BlackBerry’s newly named creative director, American singer and pop icon Alicia Keys caused a social media firestorm when a tweet from her account was posted using an iPhone rather than the BlackBerry she is being paid to endorse.

This isn't the first time celebrity endorsements have been posted using devices linked to the competition. In November, RIA Novosti reported that American talk show host Oprah Winfrey tweeted her love for Microsoft's Surface RT from an Apple iPad.

In a product review of the BlackBerry Z10, editors with the tech website CNET said, “RIM dug deep to give the slick-looking BlackBerry Z10 enough features to satisfy both consumers and professionals.”

But on the downside, CNET said the Z10 is “unintuitive” and has a “long list of OS inefficiencies and omissions.”

“The bare-bones maps app and a deficit of camera features are two examples,” CNET said.

BlackBerry’s chief executive Thorsten Heins in September of 2012 told reporters the company has a, “clear shot at being the number 3 mobile ecosystem in the world.”

In an October 2012 article, The New York Times reported that in the United States, BlackBerry was “clinging to less than 5 percent of the smartphone market – down from a dominating 50 percent just three years ago.”

Tech market expert Chowdhry said the BlackBerry 10 is an “ok product,” but it showed up too late to the market to become a real player.

“This phone should have come out four years back,” Chowdhry told RIA Novosti Tuesday. “It just doesn’t have the groundbreaking features that are required to play in the new mobile space that is dominated by both Apple and Google,” he added.

And while BlackBerry’s chief executive touted the new device as “launching an entirely new mobile experience,” Chowdhry believes it will take the type of innovation that made BlackBerry a household name in the early 2000s for the company to truly work its way back into relevance.

“They need to find a way to become 10 steps ahead of Apple,” Chowdhry said, by creating something truly innovative that we have never seen before.”