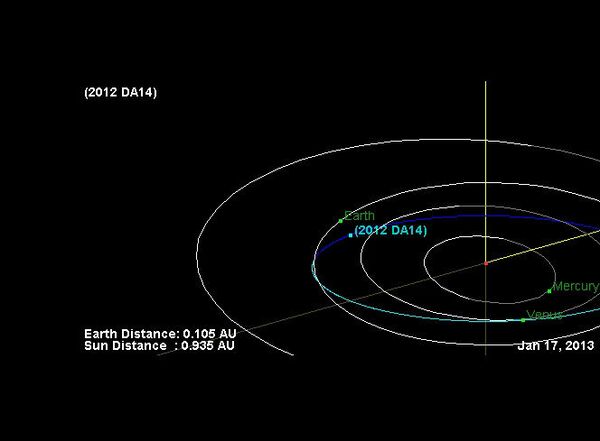 US astronomers will seek to determine the precise spin of the 2012 DA14 asteroid when it will be passing the Earth on February 15 by the smallest-ever recorded margin, the National Radio Astronomy Observatory (NRAO) said on Monday.

MOSCOW, February 12 (RIA Novosti) - US astronomers will seek to determine the precise spin of the 2012 DA14 asteroid when it will be passing the Earth on February 15 by the smallest-ever recorded margin, the National Radio Astronomy Observatory (NRAO) said on Monday.

The direction of an asteroid’s spin is an important factor in predicting how the object's orbit will change over time. The space rock develops a warm region that radiates infrared light providing a gentle but firm jet-like push to it.

The study will help to determine an asteroid’s future trajectory and decide whether it poses any threat of colliding with the planet in the foreseeable future.

"Knowing the direction of spin is essential to accurately predicting its future path, and thus determining just how close it will get to Earth in the coming years," said NRAO astronomer Michael Busch.

A team of scientists led by Busch will use the Karl G. Jansky Very Large Array (VLA) and the Very Long Baseline Array (VLBA) antennas at Pie Town and Los Alamos, New Mexico, along with a Solar System radar on NASA's 230-foot antenna at Goldstone, California for their study.

The Goldstone antenna will transmit a powerful beam of radio waves toward the asteroid, and NRAO's New Mexico antennas will receive the waves reflected from the asteroid's surface.

“Because of the asteroid's uneven surface and the different reflectivity of portions of the surface, the reflected radar signal will have a characteristic signature, or "speckles," as observed from Earth. By measuring which antenna in a widely-separated pair receives the speckle pattern first, the astronomers can learn which way the asteroid is spinning,” NRAO said.

The 45-meter asteroid, known as 2012 DA14, was detected in February 2012 when it was about 2.7 million miles (4.3 million kilometers) away. On Friday it will come no closer than 17,150 miles (27,650 kilometers) to Earth, which is well below the geosynchronous communication and weather satellites.

The asteroid is approximately 150 feet (45 meters) in diameter, has an estimated mass is about 130,000 metric tons and its possible impact is comparable to the 1908 Tunguska event.