Legality of Drone Strikes, Assassinations Under Fire in US 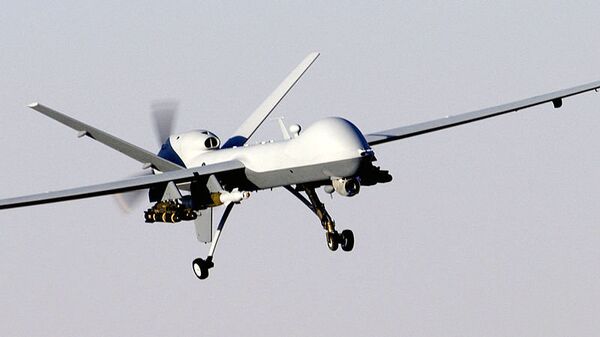 US President Barack Obama and his administration may consider themselves capable of correctly determining whether a US citizen can be assassinated for their ties to al-Qaida.

WASHINGTON, February 6 (By Carl Schreck for RIA Novosti) – US President Barack Obama and his administration may consider themselves capable of correctly determining whether a US citizen can be assassinated for their ties to al-Qaida.

But what about the next American president?

“They have to think about whether a future administration may use force in situations that decision-makers today might be uncomfortable with,” former US State Department attorney David Kaye told RIA Novosti on Wednesday.

This is just one of the numerous problematic issues raised by the US Department of Justice memo leaked this week that shines a light on the murky legal underpinnings of one of the most controversial questions faced by Washington in its global terrorism operations: When is the United States justified in killings its own citizens?

Both the leaked memo and the drone base report have sparked renewed debate in the United States over the legality, morality and efficacy of Washington’s counterterrorism operations.

Questions on both issues are likely to figure prominently Thursday during US Senate confirmation hearings for Obama’s choice to be the next head of the US Central Intelligence Agency (CIA), John Brennan, a key adviser to the American president on drone strikes and targeted attacks against al-Qaida leaders.

Human rights watchdogs have called the leaked 16-page memo stipulating the criteria for killing US citizens linked to al-Qaida “profoundly disturbing" and “a stunning overreach of executive authority,” and lawmakers on Capitol Hill are calling on the White House to release the Obama administration’s full legal justification for these assassinations.

Legal scholars and national security law experts say the Justice Department memo leaked this week is likely just the tip of the iceberg as far as US policy for determining which Americans can justifiably be assassinated for their links to al-Qaida.

“I am going to pull out all the stops to get the actual legal analysis because without it, in effect, the administration is practicing secret law,” said Sen. Ron Wyden, a Democrat from Oregon, the Washington newspaper Roll Call reported Wednesday.

According to the Justice Department memo, it is lawful for a US citizen to be killed if: he or she is a “senior operational leader of al-Qaida or an associated force”; if an “informed, high-level official of the US government” determines that the target presents an “imminent threat” to the United States; if capture of the suspect is “infeasible”; and if the operation would be conducted “in a manner consistent with the applicable law of war principles.”

The provision concerning an imminent threat “strains the definition of imminence beyond all recognition,” Chris Jenks, a law professor at Southern Methodist University, told RIA Novosti.

“Whether he’s asleep in bed and just thinking of a future attack, or proactively planning an attack, the United States would find that an imminence requirement is met,” said Jenks, a former US Army lawyer who prosecuted counterterrorism cases.

Kaye, the former State Department lawyer, said that based on the memo, it is unclear exactly at what level of the government such an assassination could be signed off on.

“When the memo refers to an informed high-level official of the US government, does that mean the president? Does it mean the secretary of defense?” said Kaye, a law professor at the University of California Irvine. “We don’t know who it is.”

But former US army prosecutor Geoffrey Corn said that for all of the ambiguity of the memo, the thresholds it establishes in order to justify the assassination of US citizens for their al-Qaida links actually ties Washington’s hands to a certain degree in dealing with enemy forces.

“I think the memo reflects much more of a policy of limitation on the full scope of the authority that the government could assert,” said Corn, a professor at South Texas College of Law. “The administration is getting bashed over this as a terrible indication of a cavalier approach to taking the life of an American citizen. But in many ways it shows a remarkable level of restraint.”

Both Corn and Jenks said much of the confusion over the document stems from an attempt by the Justice Department to formulate policy based on a combination of disparate aspects of the law, including constitutional law, law of war, and legal justification for the use of force.

“In many ways you’re getting an insight as to how the sausage gets made in government,” said Corn, who wrote an academic paper cited in the Justice Department memo. “And as the saying goes, seeing how the sausage is made can make you sick.”