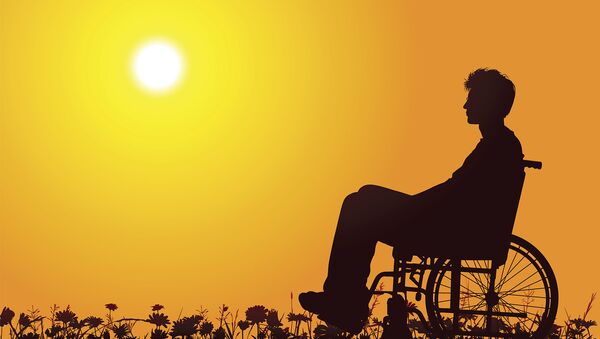 Disabled school students in the United States who want to participate in sports are being given an equal playing field after the government on Friday said schools must give those students the same opportunity to play.

WASHINGTON, January 26 (By Maria Young for RIA Novosti) - Disabled school students in the United States who want to participate in sports are being given an equal playing field after the government on Friday said schools must give those students the same opportunity to play.

"Sports can provide invaluable lessons in discipline, selflessness, passion and courage, and this guidance will help schools ensure that students with disabilities have an equal opportunity to benefit from the life lessons they can learn on the playing field or on the court," said Education Secretary Arne Duncan in a statement.

“A school district that offers extracurricular athletics must do so in such manner as is necessary to afford qualified students with disabilities an equal opportunity for participation. This means making reasonable modifications and providing those aids and services that are necessary to ensure an equal opportunity to participate,” said the Department of Education (DOE) in a letter to schools issued Friday.

The change was prompted in part by the experience of Tatyana McFadden, a disabled Russian orphan who was adopted by an American family and went on to win gold, silver and bronze medals in Paralympic competitions all over the world.

Even after McFadden won a silver and bronze medal at the Paralympic Games in Athens, Greece in 2004 when she was 15 years old, it wasn’t until she won a lawsuit later that she was allowed to compete on her high school track team.

“She came home from school and told me, ‘They said disabled kids can’t participate on the track team, that there’s other places for kids like us,’ and I said, ‘Oh, no, you must have misunderstood,’” recalls her mother, Deborah McFadden, in an interview with RIA Novosti.

But there was no mistake, she said.

“I went and talked to the school and they said, ‘But there’s no other kids in wheelchairs,’ and our answer was, ‘they’re not there because you won’t let them be there,’” she added.

“From my personal experience, this was one of the toughest battles and I’m a pretty tough person, I came from an orphanage in Russia, I’m a Paralympic athlete, but being denied participating in high school sports, that was so tough,” Tatyana McFadden told RIA Novosti.

“I was bullied, people kept saying ‘you have sports for your own kind,’ and I finally said, ‘this is enough,’” she added.

After the McFaddens won their lawsuit, Tatyana said she approached the White House through the President’s Council on Fitness, and began appealing to members of the US Congress, asking for an investigation.

A 2010 report by the US Government Accountability Office (GAO) found students with disabilities are not being afforded an equal opportunity to participate in extracurricular athletics.

The GAO recommended what it called a “clarification” of the Rehabilitation Act of 1973, which prevents discrimination of students with disabilities, including participation in nonacademic and extracurricular activities.

The DOE announcement was met with cheers from education groups and the disabled community.

“The National Education Association (NEA) believes public education is the gateway to opportunity,” the NEA said in a statement. “All students have the human and civil right to a quality public education with equal access that develops their potential, independence and character.”

But there are questions about whether the DOE has the authority to make such an order without a more formal, public process, and concerns about the funding that will be needed for cash-strapped school districts to carry it out.

“It boggles my mind that the Obama administration, without an ounce of public debate or deliberation, without an iota of congressional authorization or approval, could declare by fiat that public schools nationwide must provide such programs or risk their federal education funding. Talk about executive overreach! Talk about a regulatory rampage!” wrote Michael Petrilli, an education analyst and vice president of the Thomas B. Fordham Institute, a conservative Washington think tank, in a blog post.

Petrilli insists he loves wheelchair basketball and openly supports the concept of inclusion in athletic programs for disabled students.

His beef is with what he sees as a heavy-handed mandate being forced on struggling school districts with no guidance as to what the order means or where the funding will come from.

“This is a huge change to America’s sports programs and there’s been no public input, no discussion whatsoever. It’s a new unfunded federal mandate, and it’s not even clear what limits there are,” Petrilli said in an interview with RIA Novosti.

“We provide our own wheelchair, that’s like providing your own tennis shoes, and other costs, maybe lights that can flash for kids who are deaf, or a school nurse who has to stick around if there’s someone with diabetes, but in most cases, the costs are negligible,” she added.

The DOE told schools that they may still “require a level of skill or ability for participation in a competitive program or activity,” and said the equal opportunity rule does not mean that every disabled student is guaranteed a spot on an athletic team for which other students must compete.

For her part, Tatyana McFadden said the news of Friday’s announcement was exciting, and a long time in coming.

“It’s finally changing, and it’s changing for the better,” she said. “Thousands of lives will change for the better because of this, and I just can’t wait to watch it blossom.”