‘Apps for Apes’ at the Washington National Zoo 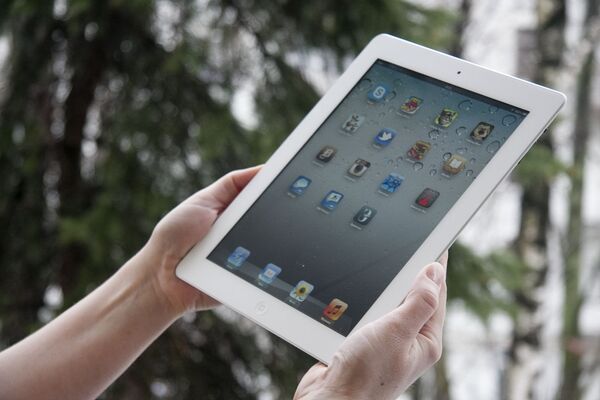 Forget the bananas, the apes at Washington’s National Zoo are turning to “Apples,” at least for entertainment during the bitter cold weather that is keeping them inside.

WASHINGTON, January 23 (RIA Novosti) - Forget the bananas, the apes at Washington’s National Zoo are turning to “Apples,” at least for entertainment during the bitter cold weather that is keeping them inside.

Zookeepers there said they are using Apple iPads to keep the animals busy during the frigid January temperatures that have swept the northeastern United States.

“Today being incredibly cold is a day they're inside, and so that sort of indoor enrichment is one we'd offer today," animal keeper Erin Stromberg told radio station WTOP.

The zookeepers bring the iPad’s inside of the animal’s enclosure, holding it for them as they play.

"They can't hold it because they're seven to ten times stronger than we are. They would certainly destroy it," Stromberg told the radio station.

Some of the popular primate activities include musical instrument apps that allow the apes to play the piano, bongos and drums. They also enjoy matching games and other apps designed for kids, Stromberg said.

"It's like dealing with a child. If you give them a box of crayons to play with and that entertains them for a while, that's something they like," Stromberg told WTOP.

The National Zoo began participating in the Apps for Apes program last year. There are six orangutans that play with iPads donated through the Orangutan Outreach program.

Stromberg said the primates enjoy playing with the tablets, and hopes more zoos start using them.

As for the future: "We'll even have the opportunity to Skype with other orangutans at different zoos," Stromberg said.