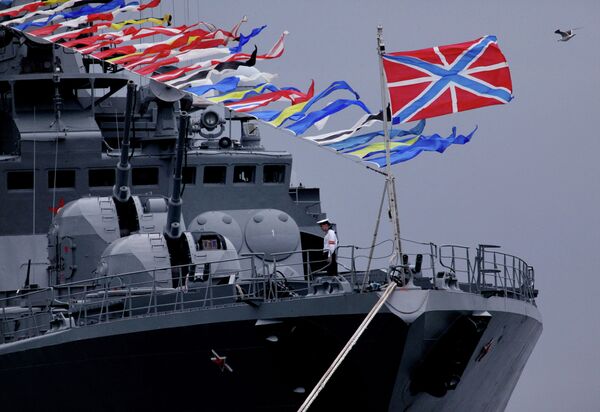 The Russian Navy will get over 50 new warships by 2016, including strategic nuclear submarines and special operations support vessels, the Defense Ministry reported on Thursday.

MOSCOW, January 3 (RIA Novosti) – The Russian Navy will get over 50 new warships by 2016, including strategic nuclear submarines and special operations support vessels, the Defense Ministry reported on Thursday.

“By 2016, the combat strength of the Navy will be replenished with 18 surface warships of various ranks and designation, and also 30 special-purpose and counter-subversion vessels. It is also planned to put 6 multi-purpose and strategic submarines into operation,” the ministry said in a statement.

The quality of new generations of surface warships and submarines being built for the Russian Navy will improve with stronger state acceptance control at the shipyards involved in the Navy’s shipbuilding program, the statement said.

“The implementation of the shipbuilding program envisages serial construction along with the introduction of new technical and modernization solutions into each subsequently built warship,” the statement said.

Russia is currently in the middle of a huge rearmament program, with $659 billion to be spent on arms procurement by 2020, according to the Defense Ministry.

Russia’s Defense Ministry announced on Wednesday unprecedented naval drills in the Mediterranean and Black Seas in late January with the involvement of warships from the Northern, Baltic, Black Sea and Pacific Fleets.

“The Russian Navy’s drills of this scope will be held for the first time over the past few decades and are designed to improve control, ensure and practice multiservice force interaction of the fleets in the far-off maritime zones,” the ministry’s press office said.

The drills will be held in line with the Russian Armed Forces’ 2013 combat training plan and will aim to “practice the issues of establishing a multiservice grouping of forces (troops) outside Russia, planning its use and conducting joint actions as part of a united naval grouping based on a common plan,” the press office said.