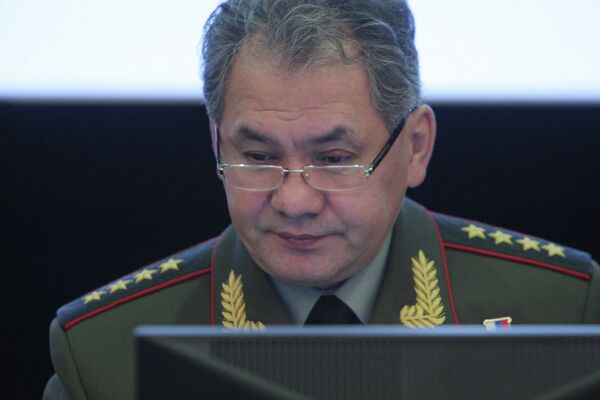 Newly appointed Defense Minister Sergei Shoigu has dismissed the head of the ministry's education department as part of the ongoing reshuffle in the ranks of senior defense officials.

MOSCOW, December 8 (RIA Novosti) – Newly appointed Defense Minister Sergei Shoigu has dismissed the head of the ministry's education department as part of the ongoing reshuffle in the ranks of senior defense officials.

Priezzheva, who had occupied the post since 2010, is considered the author of the current reform of Russia’s military education system, which has met strong opposition within the military.

Deputy Defense Minister Nikolai Pankov will oversee the work of the department until a new directors is appointed.

Earlier on Friday, Shoigu harshly criticized the military education reform saying it has “failed to ensure a credible demand for the preparation of specialists at military educational institutions,” and “formed a negative public opinion of the defense ministry in general.”

The minister, who led a working session on the military education reform, instructed the department officials to prepare draft legislation that would reassign the institutions of higher military education under direct control of commanders of the branches and arms of the Russian Armed Forces.

Russia’s top military circle has been undergoing a major reshuffle following the November 5 appointment of Shoigu as Defense Minister, replacing Anatoly Serdyukov, who was dismissed amid an investigation into fraudulent transactions involving real estate worth nearly $100 million owned by Oboronservis, a ministry-controlled company.

He has also dismissed Alexander Sukhorukov from the post of First Deputy Defense Minister, replacing him with Col. Gen. Arkady Bakhin, former commander of the Western Military District.

Putin has promoted the Commander of Russia’s Space Forces, 55-year-old Oleg Ostapenko, to the post of Deputy Defense Minister, and fired several dozen people who had been employed as Serdyukov's advisors.

Meanwhile, Shoigu has brought in no less than 14 officers and generals who used to work with him in the Emergencies Ministry to join his team at the Defense Ministry.