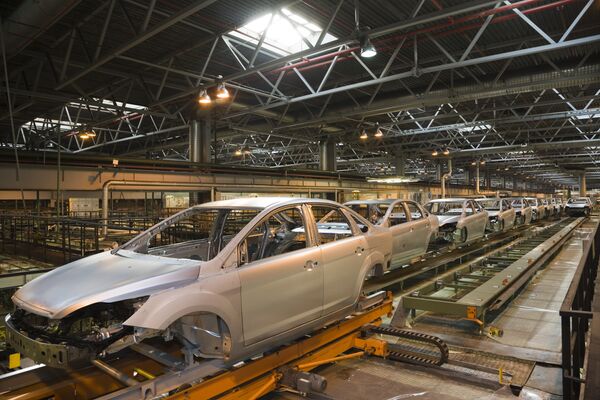 US transport officials have proposed a plan to require devices that collect information about everything from how fast a car is going to whether its occupants are wearing seatbelts be installed in all light passenger vehicles within two years.

WASHINGTON, December 8 (By Maria Young for RIA Novosti) - US transport officials have proposed a plan to require devices that collect information about everything from how fast a car is going to whether its occupants are wearing seatbelts be installed in all light passenger vehicles within two years.

But it turns out, for thousands, maybe millions, of US drivers, the “event data recorders” (EDRs) are already there – in many cases unbeknownst to drivers, according to privacy experts who want restrictions on what information can be collected and who can have access to it.

The plan to require that the devices be installed in all light vehicles sold in the United States by September 2014 was put forward by the Department of Transportation’s National Highway Traffic Safety Administration (NHTSA), and government officials say it is long overdue.

"By understanding how drivers respond in a crash and whether key safety systems operate properly, NHTSA and automakers can make our vehicles and our roadways even safer," said Transportation Secretary Ray LaHood. "This proposal will give us the critical insight and information we need to save more lives."

The proposal formalizes what has been taking place quietly behind the scenes for many of America’s automakers, who have been installing the EDRs for several years.

“The event data recorders are already in 96% of cars and light trucks in the 2013 models,” and many earlier models as well, said Wade Newton, a spokesman for the Alliance of Automobile Manufacturers, in an interview with RIA Novosti.

“They look at things like vehicle speed, engine throttle, whether the driver had his foot on the gas before the brake, the crash force at the moment of impact,” he said.

In some cases, data from EDRs has been used in criminal cases and lawsuits against drivers who never realized the information was being recorded, according to The Associated Press.

Newton said that EDRs are less invasive than the so-called “black boxes” that are used in airplanes because right now EDRs only record a few seconds of data at a time and they don’t record things like cockpit conversations on aircraft.

Most if not all manufacturers disclose the data collection process somewhere in the owners’ manuals, he said.

“You would have to read the owner’s manual very carefully and get to that part where it talks about GPSs (global positioning systems) and other features like that and probably know what you’re looking for to know that this is even possibly a part of your vehicle,” said Lillie Coney, associate director of the advocacy group Electronic Privacy Information Center (EPIC).

“A court order should be required to access EDR data unless it is used for research purposes where the data cannot be traced to a specific vehicle,” said AAA spokesman Michael Green.

“All vehicle manufacturers should be required to disclose the existence of EDR devices on new vehicle window stickers.”

But right now, that’s not the case.

It’s the kind of thing, Coney said, that drives consumers up the wall, particularly for an industry that spends annually billions of dollars in advertising to tell consumers about the new features that might help sell more cars.

“Especially when they find out about it after the fact, you know – ‘Surprise’!” she said. “We don’t like surprises.”

Is it sneaky? “Of course,” she said. “Most people don’t know about it, and they’re not given the right to opt in.”

Coney said the data being collected could be considered very valuable, and more so in the future, when the technology gets more sophisticated.

It could be used to impact everything from a driver’s insurance rates to their credit rating and whether they are considered for certain jobs.

Transportation officials and automakers say they see the potential safety benefits from data that gives better information about how vehicles respond in real driving situations.

The proposal announced Friday by NHTSA allows 60 days for public input, and could lead to more formal arrangements about who can access that data and how it can be used.

Information on how to submit comments is available here.