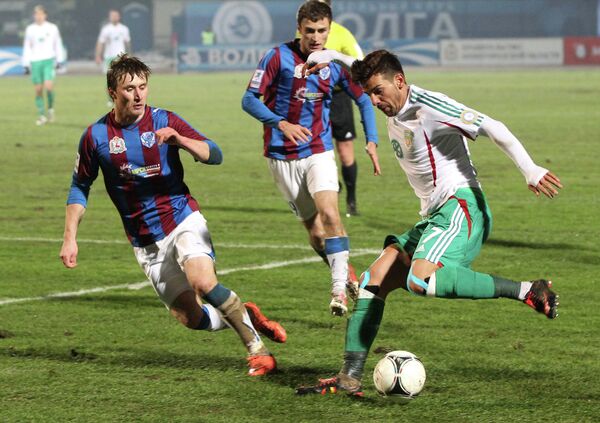 © RIA Novosti . Grigorii Sokolov
/
Go to the photo bank
Subscribe
Shamil Asildarov rescued a 1-1 for FC Volga against his old side Terek Grozny in the Russian Premier League on Saturday.

MOSCOW, December 1 (R-Sport) - Shamil Asildarov rescued a 1-1 for FC Volga against his old side Terek Grozny in the Russian Premier League on Saturday.

The Dagestan-born striker, who joined the Nizhny Novgorod side in the summer after two years in Chechnya, drove home Alexander Salugin's free kick on 53 minutes for the point.

Terek midfielder Oleg Ivanov had put his team ahead on eight minutes, sidefooting into the roof of the net after a pinpoint through pass from Fyodor Kudryashov.

Strugglers Volga remain 13th after their third draw in a row, on 13 points.

On Friday, Zenit won 4-2 at Spartak Moscow in a match that saw the hosts finish with nine men. And FC Krasnodar stole a dramatic 2-1 win over local rivals FC Kuban in the fourth minute of injury time.

After CSKA host Anzhi, David Bentley's FC Rostov face Krylya Sovetov before Mordovia Saransk and Amkar Perm wrap up the round of games on Monday.