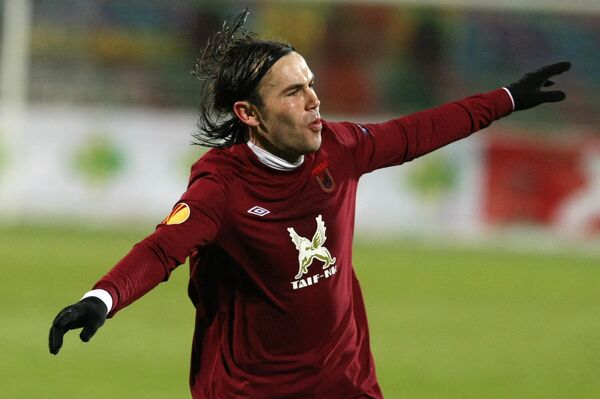 © RIA Novosti . Maksim Bogodvid
/
Go to the mediabank
Subscribe
International
India
Africa
Rubin Kazan were left to rue some near misses as they were held to a 0-0 draw at home by ten-man FC Volga on Monday.

MOSCOW, November 26 (R-Sport) - Rubin Kazan were left to rue some near misses as they were held to a 0-0 draw at home by ten-man FC Volga on Monday.

Rubin’s four-game winning streak came to an end, but the former champions still rose two places to fourth in the Russian Premier League, while Volga go up one place to 13th.

The hosts dominated throughout, recording 16 shots to Volga’s two, but Rubin hit the target just once.

Rubin’s Bibras Natkho curled a shot onto the post in stoppage time before Dmitry Polyanin saved Volga with a goalline clearance.

Earlier, Jose Salomon Rondon missed a chance to put Rubin ahead when Gokdeniz Karadeniz sent a cross past the face of goal, but the Panamanian was unable to reach the ball for a tap-in finish.

Volga's Alexei Sapogov was given a straight red card after appearing to grab Rubin's Carlos Eduardo around the throat in a brawl late on.

Later Monday, Zenit St. Petersburg host leaders CSKA Moscow in a match to be played behind closed doors because of Zenit’s punishment for a flare-throwing incident.

On Friday, FC Rostov beat a woeful Mordovia Saransk side 2-0.