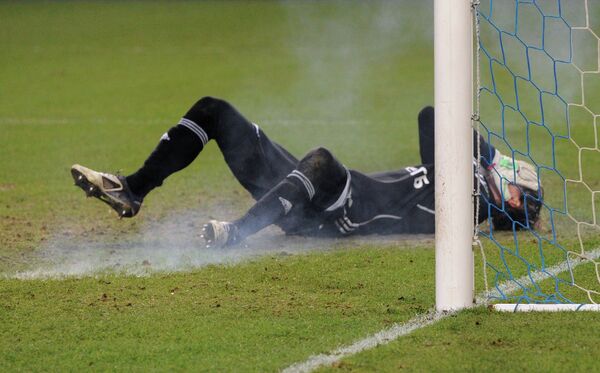 Russia's sports minister insists the country's World Cup 2018 plans won't be blown off track by a controversial flare-throwing incident that has shaken Russian football to the core.

MOSCOW, November 23 (R-Sport) - Russia's sports minister insists the country's World Cup 2018 plans won't be blown off track by a controversial flare-throwing incident that has shaken Russian football to the core.

Champions Zenit St. Petersburg are appealing a default 3-0 defeat handed down by the Russian FA after their league match with Dynamo Moscow was abandoned when Dynamo goalkeeper Anton Shunin was injured by a flare thrown from the crowd.

It brought football hooliganism under the spotlight once again in a country that is preparing to stage the sport's marquee event in 2018, but Sports Minister Vitaly Mutko called for calm.

Zenit's general director Maxim Mitrofanov has threatened to pull the club out of the championship over the decision, which also saw the club fined and ordered to play two home games behind closed doors.

Dynamo were also fined and told to play one game without spectators.

Referring to the Shunin incident, FIFA general secretary Jerome Valcke said in St. Petersburg earlier this week that "I can assure you nothing like this will happen at the World Cup."

Police have arrested a female fan they suspect of throwing the smoke bomb that injured Shunin.

The Russian government is trying to push through legislation that would toughen sanctions for football hooligans.