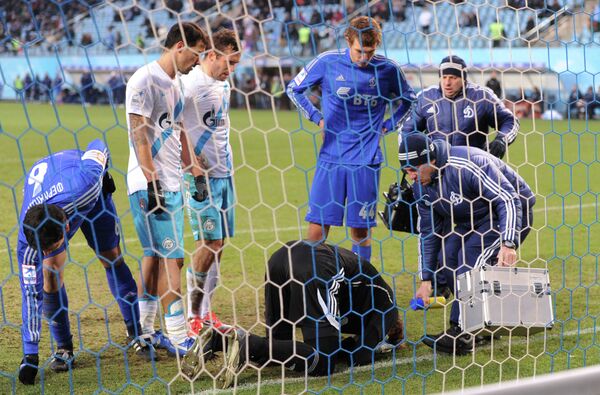 © RIA Novosti . Vladimir Fedorenko
/
Go to the mediabank
Subscribe
International
India
Africa
The Russian FA's disciplinary committee has awarded Dynamo Moscow a technical victory after Saturday's league match was abandoned when a player was hurt by a flare thrown from the Zenit St. Petersburg supporters end.

MOSCOW, November 22 (R-Sport) - The Russian FA's disciplinary committee has awarded Dynamo Moscow a technical 3-0 victory after a league match was abandoned when a player was hurt by a flare thrown from the Zenit St. Petersburg supporters end.

Dynamo goalkeeper Anton Shunin was briefly hospitalized with eye injuries following Saturday's incident, which prompted the referee to call the match off in the 36th minute.

Zenit, the reigning champions, have been ordered to play two home games behind closed doors.

Fans have also been banned from Dynamo's next home game, and both teams have received small fines.

"The disciplinary code stipulates that the club bears the responsibility for fans in the away sector," said Artur Grigoryants, the body's deputy chairman.

"At the pre-match meeting, both Dynamo and Zenit put their signatures to the fact that tribune B is the away sector. Consequently, all people who sat there were nominally Zenit fans," he said.

Zenit had blamed Dynamo in the immediate aftermath, saying the host club must bear responsibility for security at matches, claims Dynamo called "absurd."

The champions' general director Maxim Mitrofanov had earlier threatened to pull the club out of the championship if the decision did not go their way, and has declared Zenit will appeal the ruling.
"Our position has not changed," he told R-Sport.

Dynamo spokesman Konstantin Alexeev said the club would not appeal and was "satisfied" that the decision had been made "in strict compliance with the existing regulations."

Dynamo, who had led 1-0 on a Vladimir Granat goal when the game was stopped, register their seventh win of the season, remaining in 10th place but moving to 21 points, 18 short of CSKA Moscow's lead.
It is Zenit's third defeat, leaving them in third place on 33 points.

Zenit were also handed a technical defeat the last time the disciplinary committee was required to rule on an abandoned league game.

In April 2011, coach Luciano Spalletti failed to field at least one Russian player under 21 years of age, in breach of league rules, and forfeited the game 3-0 by default. They won a ruling in 2007 after now-second tier Torpedo Moscow fielded an ineligible player.

The last Russian match to be called off due to hooliganism was Dynamo's Russian Cup clash with Torpedo Moscow in September. That game was abandoned due to flares being thrown onto the pitch.

Torpedo, playing at home, were handed a 3-0 loss by default, and ordered to play the next three home games behind closed doors, and both clubs received small fines.