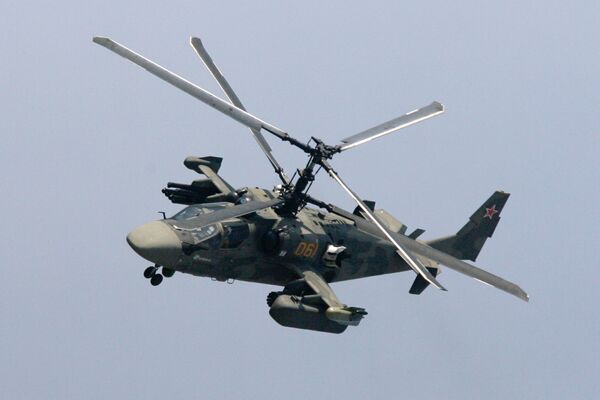 “The first serial Ka-52K will be assembled in 2013,” Mikheyev said on Monday. “By the time the first Mistral enters service in 2014, we are ready to make as many helicopters as the Defense Ministry will order.”

Prototypes of the naval version of the Ka-52 Alligator attack helicopter are under construction at the Progress plant in Russia’s Far East, he said.

The naval variant will feature a modified version of Zhuk-A phased array radar, folding rotor blades and anti-corrosion treatment to fuselage and on-board systems, which is necessary for any helicopter designed to operate from a ship.

The Ka-52K will reportedly be capable of launching anti-ship missiles.

Russia and France signed a $1.2-billion contract for two French-built Mistral class ships, including the transfer of sensitive technology, in June 2011. Two more ships are expected to be 80% built in Russia, 20% in France.

An air wing aboard a Mistral warship is expected to comprise eight Ka-52Ks and eight Ka-29/31 Helix assault transport helicopters.

The latter has been originally designed for the Soviet Navy and does not require design changes or modernization, making its adaptation for Mistrals less time-consuming and costly, Mikheyev said.

The French-built ‘Vladivostok’ and ‘Sevastopol’ Mistral class ships are expected to be put in service with Russia’s Pacific Fleet in 2014-2015.