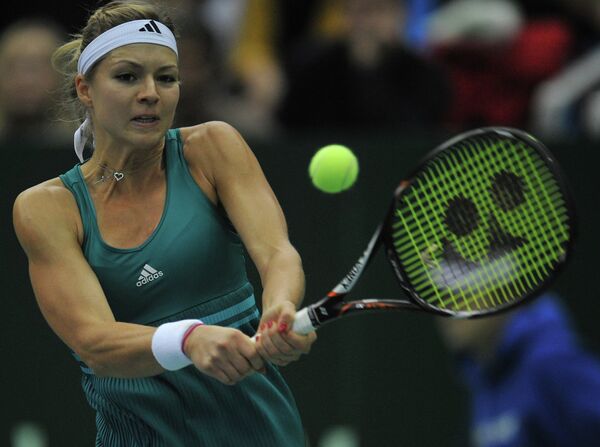 © RIA Novosti . Alexey Kudenko
/
Go to the photo bank
Subscribe
Maria Kirilenko and Nadia Petrova took the last doubles place at next week's WTA Championships after reaching the final of the Kremlin Cup on Saturday.

Maria Kirilenko and Nadia Petrova took the last doubles place at next week's WTA Championships after reaching the final of the Kremlin Cup on Saturday.

The Russian pair completed a 7-5, 6-4 victory over Raquel Kops-Jones and Abigail Spears of the United States in a rollercoaster semifinal.

“It was a very important win, the match was very difficult. Everything was being decided here.” Petrova said after the match.

“Now we shall have a friendly dinner as we need to relax a little, to get rid of excessive emotions and to come cool-headed to the next game.”

The win sends them to Istanbul for the season-ending event as the last of the four top-ranked pairs, where they will compete with Italians Roberta Vinci and Sara Errani, Czech pair Andrea Hlavackova and Lucie Hradecka and the U.S. duo of Liezel Huber and Lisa Raymond.

“Thank God the Williams sisters won’t be there.” Kirilenko said, referring to the pair who beat her and Petrova in the Olympic semifinal in August in straight sets on their way to gold, with the Russians taking bronze.

“All the opponents are worthy. All are experienced, world top-ranked players, Grand Slam winners, so it will be difficult,” Petrova said of the other three pairs in Istanbul.

Petrova won the tour finals doubles event with Meghan Shaughnessy of the United States in 2004.

The opponents traded breaks in the first set before Kirilenko and Petrova broke the Americans’ serve to take it 7-5.

In the second set, the U.S. duo went 3-1 up before the Russians stormed back to finish off their opponents.

In the final, Kirilenko and Petrova, who won the Kremlin Cup title in 2009, will face their top-seeded compatriots Ekaterina Makarova and Elena Vesnina.

Both Kirilenko and Petrova earlier crashed out of the singles event, with Kirilenko losing her quarterfinal clash against Sofia Arvidsson of Sweden and Petrova eliminated by Romania’s Simona Halep in the first round.