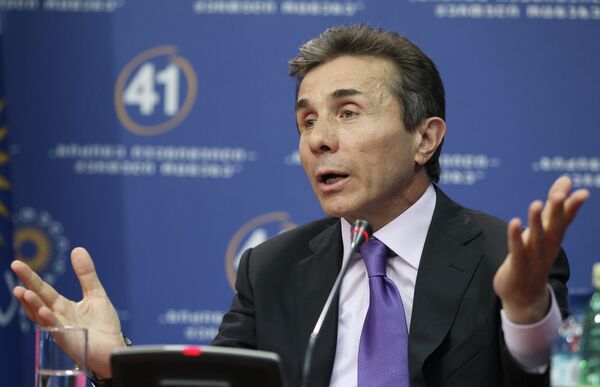 Georgian billionaire tycoon Bidzina Ivanishvili, the leader of the Georgian Dream coalition that won the October 1 parliamentary elections, says he will welcome Russian investors in Georgia.

Georgian billionaire tycoon Bidzina Ivanishvili, the leader of the Georgian Dream coalition that won the October 1 parliamentary elections, says he will welcome Russian investors in Georgia.

“On my part, I’ll render big support and I’m ready to contribute to this with my personal capital,” Ivanishvili said in an interview with Forbes magazine.

Russia’s elder generation has nostalgia for Georgia, Ivanishvili said, responding to a question about what Georgia could offer to evoke Russian investors’ interest.

“The younger generation may have become estranged [from Russia] but the elder generation still remembers [the Soviet period when Georgia was part of the Soviet Union] and has nostalgia for this. We have the sea, mountains and very interesting countryside and our countries have close cultures,” he said.

“We need to contribute to the development of this process and help solve [existing] problems.”

The Georgian-born billionaire, who built his business empire in Russia but sold his assets before the election to focus on his bid to oust President Mikheil Saakashvili’s ruling party in the October parliamentary poll, earlier said Georgian businessmen should return to the Russian market as they were unprepared to export their products to the United States and the European Union.

Russia banned imports of Georgian wines and two popular brands of mineral water in 2006 citing the poor quality of the products, a move widely condemned in Georgia as politically motivated.

Relations between Georgia and Russia saw a sharp increase in tensions during Saakashvili’s rule, which culminated in a five-day conflict in 2008 over the breakaway republic of South Ossetia.

Georgia suffered a humiliating defeat, and the de facto loss of one-fifth of its territory, as Russia recognized the independence of South Ossetia and another breakaway republic, Abkhazia.

Moscow and Tbilisi have had no diplomatic relations since then.