Another Report of Loose Seats on American Airlines 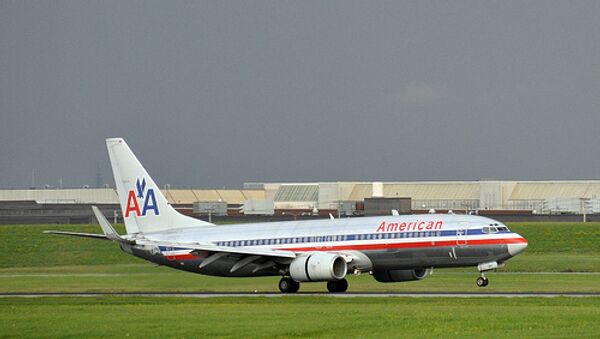 © Flickr / abdallahh
Subscribe
There is a third report of passenger seats coming loose mid-flight on an American Airlines jet, this one on board a September 26 flight from Vail, Colorado to Dallas.

There is a third report of passenger seats coming loose mid-flight on an American Airlines jet, this one on board a September 26 flight from Vail, Colorado to Dallas.

The newest report surfaced Tuesday, after the airline – which filed for bankruptcy protection last November – confirmed two other recent incidents of loose seats that led to emergency landings, one on Saturday and another on Monday.

"Out of an abundance of caution, American has decided to proactively reinspect eight 757s," American Airlines spokeswoman Andrea Huguley said in a statement. "The seats were installed by American maintenance and contract maintenance. The issue does not seem to be tied to any one maintenance facility or one workgroup."

The eight planes being reinspected have been taken out of service.

The Saturday incident occurred when seats became detached on Flight 685 from Boston to Miami, and prompted an emergency landing at New York City’s JFK International Airport.

A similar thing happened Monday on Flight 443, from New York to Miami, and the plane returned to JFK. Passengers were moved to other seats and no one was injured.

"Preliminary information indicates that both aircraft had recently undergone maintenance during which the seats had been removed and re-installed," according to the FAA.

The reports of loose seats has raised concerns that workers, upset about pending layoffs and cuts in pay – could be behind the seat troubles.

Huguley said the loose seats were not the result of sabotage by workers.

"It could be sabotage or it could be just sloppiness, but either way, it's a disaster for the airline," George Hobica of Airfarewatchdog.com told ABC News.