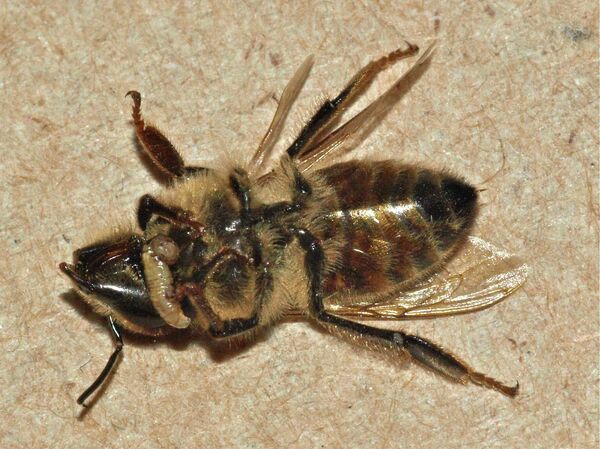 © Courtesy of San Francisco State University
Subscribe
They live fast, die young and appear to harm only themselves. But across the United States, researchers are keeping a close eye on growing numbers of “zombie bees” – infected honey bees distinguished by their erratic, nighttime flights and sudden, mysterious deaths.

They live fast, die young and appear to harm only themselves. But across the United States, researchers are keeping a close eye on growing numbers of “zombie bees” – infected honey bees distinguished by their erratic, nighttime flights and sudden, mysterious deaths.

“We are calling it the flight of the living dead,” John Hafernik, biology professor at San Francisco State University and leading zombie bee researcher, said Wednesday. “It is a one way flight. The bees are leaving the hive to die.”

Hafernik was the first person to identify “zombie bees” after accidentally discovering the flying insects near the biology building on SFSU’s California campus in 2008.

“I saw groups of bees acting funny in front of the building,” Hafernik explained, and upon doing research he discovered the insects had been infected by the Apocephalus borealis – a parasitic insect known more commonly as the “zombie fly.”

The parasite injects eggs into the bee’s abdomen which then hatch into maggots, eventually leading to the honey bee’s demise.

“As maggots begin developing, something changes in the behavior of the bee and they develop a zombie-like behavior,” said Hafernik.

Soon after being infected, the bees leave the hive, often during the night, and are attracted to nighttime lighting such as street lamps.

“They get attracted by the light and often fall under the light or circle the light bulb itself and fall down,” Hafernik said. “And, within a relative short period of time they die.”

Hafernik has spearheaded a “citizen science” project, ZomBee Watch, to learn if honey bees are becoming infected in other regions of the United States.

Confirmed “zombie bee” specimens have been discovered in Washington, Oregon and as far east as South Dakota, according to the ZomBee Infection Map that documents the spread of the phenomenon.

The project is also being conducted to see if there is a connection between zombie bees and colony collapse disorder, which is a growing phenomenon affecting honey bee colonies in North America.