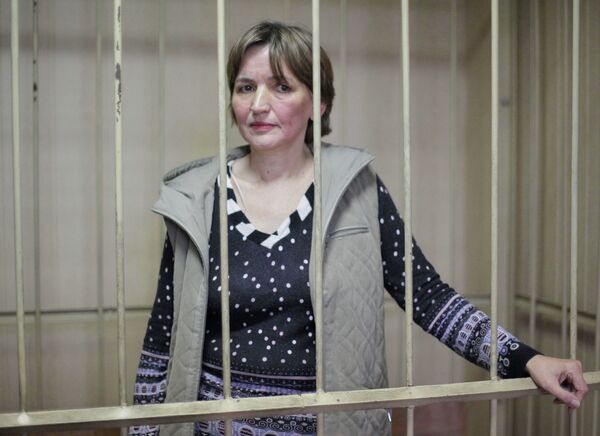 New criminal charges were brought on Wednesday against a Russian chemist facing up to 20 years behind bars over a report that contradicted the findings of federal drug control experts in a case that has caused uproar among the country’s scientific community.

New criminal charges were brought on Wednesday against a Russian chemist facing up to 20 years behind bars over a report that contradicted the findings of federal drug control experts in a case that has caused uproar among the country’s scientific community.

“This is all so absurd, I am at a loss as to how to describe it,” chemist Olga Zelenina told RIA Novosti. “I have no idea why all this is being done.”

The new charges of misleading a court over her level of expertise were brought against Zelenina less than 24 hours after she was released from a Moscow pre-trial detention center ahead of her trial. Zelenina, one of Russia’s leading experts on poppy cultivation, had been in custody since August and was released on a pledge not to leave the country.

Zelenina, 55, was arrested in August after she had written an expert report at the request of lawyers for businessman Sergei Shilov, who had been charged with drug trafficking after importing 42 metric tons of food poppy seeds from Spain in 2010 for use in bread rolls.

Experts from Russia’s Federal Drug Control Service (FSKN) said poppy plant stems mixed up with the seeds contained 295 grams of morphine and 209 grams of codeine, which could be easily extracted and used to produce heroin. Their findings were in line with federal drug policy and this was not the first time an importer of food poppy seed has faced similar charges in Russia.

Zelenina, head of the highly-respected Penza Agricultural Research Institute's analytical laboratory, rubbished the FSKN’s claims in her September 2011 report. She was detained almost a year later in an August 15 dawn raid on her home near Penza, a city about 600 km southeast of Moscow, and charged with aiding and abetting the trafficking of drugs into Russia.

“Of course, I didn’t expect anything like this. I simply answered an inquiry,” she said. “I was terrified. There were so many armed and masked police involved in the raid on my apartment that they couldn’t all fit inside.”

An FSKN spokesperson contacted by RIA confirmed the new charges, punishable by up to 4 years in jail, but declined to comment further.

Russia’s Public Chamber, the country’s human rights ombudsman, Vladimir Lukin, and almost 400 scientists nationwide have expressed support for Zelenina and alarm that the charges against her could threaten the use of independent expertise in court cases.

“This is an attempt by the FSKN to neutralize my client over her attempt to change the law on state regulations,” Zelinina’s lawyer, Natalia Andreeva, told RIA Novosti. She declined to comment on the new charges that Zelenina was not qualified to comment on the case as “no one has informed me of them yet.”

Some 30,000 Russians die from heroin abuse every year, according to official statistics. That figure is around one-third of all heroin-related deaths worldwide. NGOs estimate that there are up to three million heroin addicts in the country.

But the vast majority of the heroin injected in Russia floods into the country from Afghanistan, rather than European food poppy imports. The United Nations says twenty-one percent of the 375 tons of heroin produced annually in the war-ravaged state travel through central Asia before hitting the already glutted Russian market.