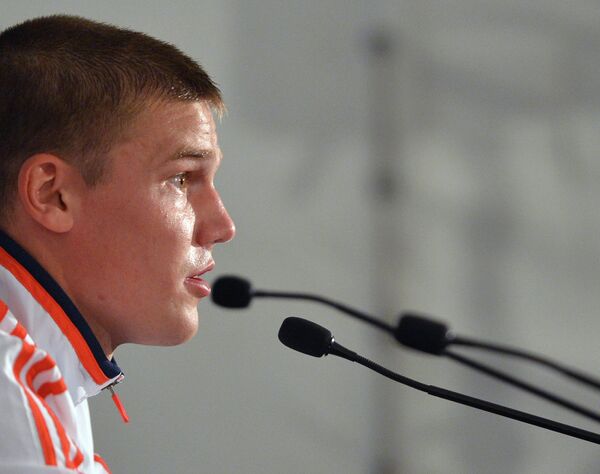 © RIA Novosti . Vladimir Pesnya
/
Go to the photo bank
Subscribe
Russia captain Igor Denisov refused to play for his club side Zenit St. Petersburg as an “ultimatum” because he had not been given a pay rise, the club said Sunday.

Russia captain Igor Denisov refused to play for his club side Zenit St. Petersburg as an “ultimatum” because he had not been given a pay rise, the club said Sunday.

Denisov and striker Alexander Kerzhakov were relegated to training with the reserve team Sunday after Zenit’s 2-2 draw with Krylya Sovetov on Saturday, in which Denisov was not included in the squad.

After the match, coach Luciano Spalletti harshly criticised several unnamed players he said were trying to disrupt the team.

“[Denisov], in the style of an ultimatum, refused to go onto the pitch in the match against Krylya Sovetov, demanding a review of his personal contract,” Zenit said in a website statement.

“By breaking his contract with the club, Denisov is behaving unprofessionally and moreover discrediting himself as a player of the club and the Russian national team and doing serious damage to his reputation.”

Zenit suggested that the pay dispute was not linked to the €40 million signings of Hulk and Axel Witsel earlier this month, saying that Denisov had first asked for a pay rise in May.

“His wage is one of the highest not just at Zenit football club, but in the whole of the Russian championship,” the club said.

“The wage is appropriate for a player of Igor’s high level.”

When asked about why Kerzhakov had also been dropped, a Zenit spokesman told R-Sport it was for unspecified “unreasonable behavior” and that the decision had been taken by club management.

Another statement on Zenit’s website said that Kerzhakov and Denisov had been left out of the team’s preparations for Tuesday’s cup tie against Baltika Kaliningrad.