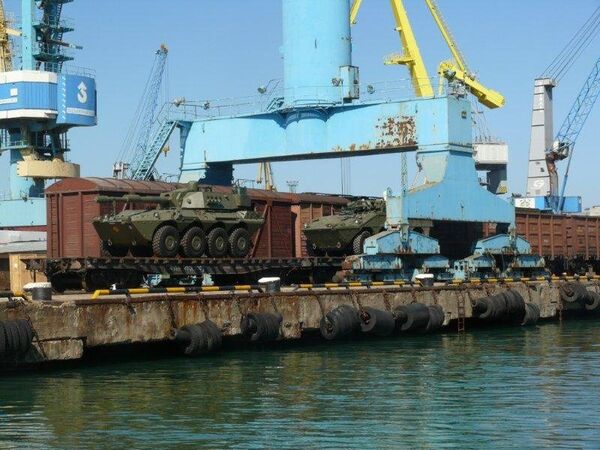 © Photo : CAST
Subscribe
The Russian Federation will not make large-scale purchases of foreign armored vehicles, Deputy Prime Minister Dmitry Rogozin said on Friday at an arms exhibition in the Urals.

The Russian Federation will not make large-scale purchases of foreign armored vehicles, Deputy Prime Minister Dmitry Rogozin said on Friday at an arms exhibition in the Urals.

"We will not make large-scale purchases of foreign armor," said Rogozin, who has special responsibilities for the military-industrial complex. "We just need a few examples, to decide what they are like and what advantages they have. Cooperation is possible on assembling armored vehicles, but this is only in the case of borrowing for those remaining areas where we lag behind," he added.

Buying the latest examples of foreign-made armor was impossible, he said.

"Even in periods of economic crisis in the west, no-one is going to sell that to us," he said.

His comments came as deliveries of Italian-made Centauro wheeled tanks began this week via Novorossisyk, where the vehicles were seen on the side of the dock after offload from ships.

In May this year, the Oto-Melara company which makes the tank said Russia was testing the Centauro and considering building it under license.

"The first two machines with 105-mm and 125-mm guns are on trial at a Moscow Region proving ground," he said.

Yury Borisov, first deputy head of the military-industrial commission, said Russia would only buy foreign weapon models on a one-off basis to study the manufacturing technology and then set up its own production.

Italy already has 400 Centauros in service.

Russia signed a deal with Italy in December 2011 for the semi-knocked down assembly of 60 Lynx light multirole armored vehicles (LMV) from Iveco, Deputy Defense Minister Alexander Sukhorukov said in January.