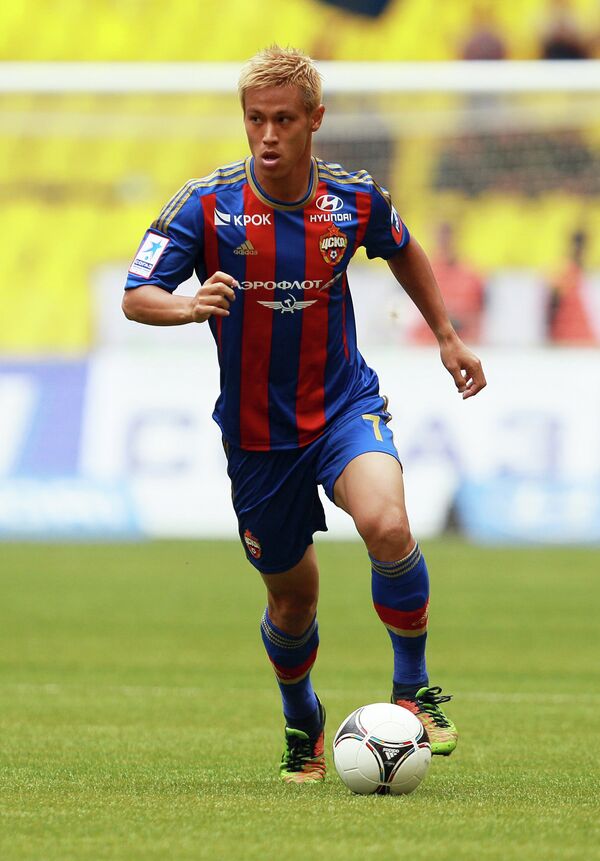 © RIA Novosti . Anton Denisov
/
Go to the photo bank
Subscribe
A simple finish from Keisuke Honda was enough to give CSKA Moscow a 1-0 lead with a valuable away goal as the Russian team beat Sweden’s AIK in Stockholm on Thursday.

A simple finish from Keisuke Honda was enough to give CSKA Moscow a 1-0 lead with a valuable away goal as the Russian team beat Sweden’s AIK in Stockholm on Thursday.

The crucial goal in the Europa League playoff first-leg match came on 62 minutes when Nigerian winger Ahmed Musa used his pace to beat defender Per Karlsson and draw out goalkeeper Ivan Turina before sending a low cross for Honda to tap the ball into the empty net.

Some crowd trouble delayed the match after the goal, and there were reports of fights between CSKA and AIK fans before the game.

The first half saw AIK test Igor Akinfeev in the CSKA goal twice, but both Celso Borges and Nils-Eric Johansson directed their efforts straight at the Russia international goalkeeper.

Musa skewed a shot wide for CSKA on 38 minutes from near the penalty spot in their best effort so far, before Zoran Tosic wasted a chance in an even better position four minutes later, sending the ball wide.

The half ended with Alan Dzagoev flashing a shot across goal and wide on the stroke of half-time.

CSKA dominated early in the second-half, with Aleksandrs Cauna sending a low shot wide on 56 minutes in a statement of intent ahead of Honda’s goal.

AIK pushed forward after CSKA opened the scoring, and the Swedes were at their most dangerous on 68 minutes when Daniel Tjerstrom’s curling 20-yard free-kick forced a diving save from Akinfeev, who turned the ball around the post.

Martin Kayongo Mutumba sent a shot over the bar for AIK on 79 minutes, and Viktor Lundberg scooped a shot well wide from inside the penalty area deep into stoppage time.