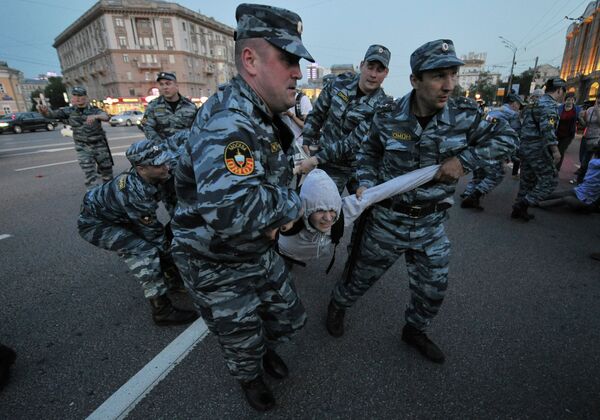 An activist of the Other Russia unregistered opposition movement and his wife have applied for political asylum in Ukraine, the Russian human rights group Agora said on Monday.

An activist of the Other Russia unregistered opposition movement and his wife have applied for political asylum in Ukraine, the Russian human rights group Agora said on Monday.

Alexei Devyatkin and his wife, journalist Jenny Kurpen, fear criminal prosecution over riots that broke out during an opposition rally in Moscow on the eve of Vladimir Putin’s inauguration as president on May 7, the report said.

“We realize that we are in the ‘risk group’ and may be included in the list of suspects [over the riots], that is why we have made the decision to leave the country,” Agora quoted Kurpen as saying in a statement.

If the Ukrainian authorities reject their application, Kurpen said she and her husband would seek asylum in a “third country,” mentioning Sweden, Finland, the Netherlands, and the United States as possible destinations.

A Ukrainian Foreign Ministry spokesman refused to either deny of confirm the report.

Kurpen said in her statement that she and her husband had been detained in downtown Moscow on May 6, the day when the opposition staged a mass rally on Bolotnaya Square, across the river from the Kremlin, to protest Putin’s inauguration.

The rally saw violent clashes between the police and protesters, in which some 80 people, including more than 30 police officers, were injured. More than 400 people were detained during and after the rally, and 16 were later identified as suspected participants in the riots. Official charges have so far been brought against half of them.

Kurpen said she and her husband fled to Kiev shortly after they were released from detention. According to Kurpen, she and Devyatkin were detained on Tverskaya Street, which is a 20-minute walk away from Bolotnaya Square – but they fear that they may be arrested again, citing an example of another activist of the Other Russia movement, Alexander Kamensky.

According to Kurpen, Kamensky was detained on May 6 several hundred meters away from Bolotnaya Square, but was subsequently charged with organizing the riots.

Kurpen said she and Devyatkin would only return to Russia if the investigation over the riots is closed and all suspects are released, Agora reported.

Another member of the Other Russia movement, Alexander Dolmatov, who took part in the May 6 demonstration, was earlier reported to have applied for political asylum in the Netherlands.