Russia to Set Up Naval Infrastructure in Arctic – Patrushev 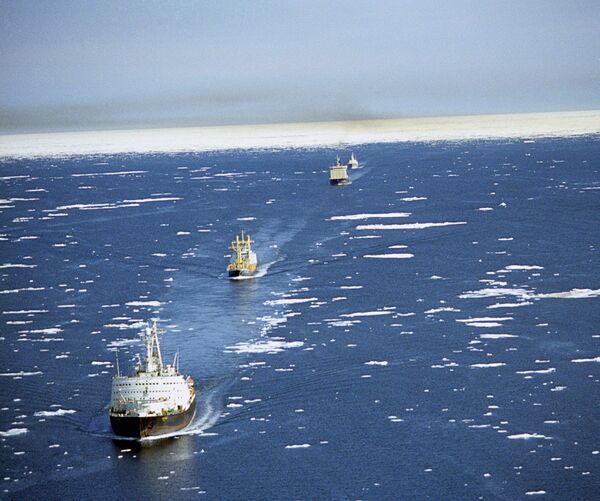 Russia will create several infrastructure hubs along the Northern Sea Route in the Arctic to be used as temporary stations for Russian warships and border guard vessels, Security Council chief Nikolai Patrushev said on Monday.

The authorities have drafted a list of “key double-purpose sites in remote areas of the Arctic seas along the Northern Sea Route” to enable “temporary stationing of Russian Navy warships and vessels operated by the Federal Security Service’s Border Guard Department,” Patrushev said during a meeting with officials in Siberia.

The Northern Sea Route stretches along Russia’s Arctic coast from Murmansk on the Barents Sea to the Bering Strait in the Far East.

The plans are in line with Russia’s Arctic doctrine, approved in 2008, which outlines state policies aimed at maintaining Russia’s role as a “major Arctic nation” and strengthening security and stability in the region. Russia is planning to deploy a combined-arms force by 2020 to guard its political and economic interests in the Arctic.

Patrushev noted on Monday that work on issues related to the creation of the Arctic stations was being delayed.

“It was proposed to create an exploratory group, carry out working trips along the Northern Sea Route, work out a relevant legal basis – but much of this has still not been done,” he said.

The Arctic, believed to have vast untapped natural resources, has increasingly been at the center of disputes between the United States, Russia, Canada, Norway, and Denmark in recent years as rising temperatures lead to a reduction in sea ice, providing access to lucrative offshore oil and gas deposits.

In April, the Russian government unveiled plans to spend around 1.3 trillion rubles ($44 billion) on economic and social projects in the Arctic before 2020. According to the Russian Ministry for Regional Development, the projects will include the creation of new transportation corridors and the development of new hydrocarbon deposits and social infrastructure in the region.

The private sector is expected to contribute some 80 billion rubles ($2.7 billion) to the projects.

Patrushev said on Monday a set of tax regulation proposals designed to boost business activities in Russia’s Arctic zone had been handed over to the government. Some amendments have already been introduced to Russian laws regulating commercial navigation along the Northern Sea Route, he added.