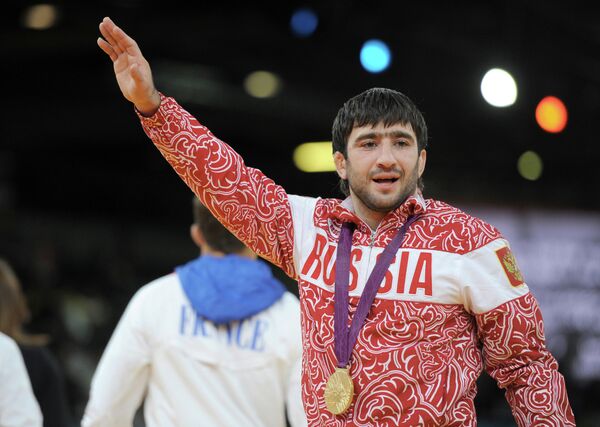 © RIA Novosti . Vladimir Baranov
/
Go to the photo bank
Subscribe
For those unfamiliar with judo, Russia’s position as the top team at the Olympics with three judo gold may seem odd, especially since the country is far ahead of Japan, which invented the sport but went home with just one gold.

For those unfamiliar with judo, Russia’s position as the top team at the Olympics with three judo gold may seem odd, especially since the country is far ahead of Japan, which invented the sport but went home with just one gold. Italian coach Ezio Gamba masterminded Russia’s success and told R-Sport on Saturday just how he managed it, and where Russia can go now in President Vladimir Putin's favorite sport.

- Let’s start with a quote from Russia’s silver medalist Alexander Mikhailin, who said yesterday that you’d predicted five judo medals for Russia. Is that true?

“That was my main plan that I set for myself when I’d just started working with the Russian team [in November 2008] and when I set myself the task of taking Russian judo to the top positions in the world.”

- Can you say you’ve completely fulfilled your objectives?

“Yes. From the very start, I set myself this goal. I only thought about how to achieve the top results, how to bring about a good result for the team. I was focusing on all of this from the very start of my work.”

- Mikhailin’s called you a magician - do you agree with that?

“I don’t think that I guaranteed the team’s success all by myself. In the team, we have a lot of specialists and everyone’s been doing a great job. We have a very good team and I work in an excellent group. Everything’s been done brilliantly, the federation’s always been loyal to us and always believed in our work, given us so much time to prepare, as much as was necessary. No one’s hurried us. At the end of the day, we’ve got results that I think we absolutely deserve.”

- Everyone in the Russian team’s noted your role in the overall success. What have you manage to create in the team?

- And what are they?

“I could answer that question for a very long time. To name the most important thing, we all worked for the same idea, as one team, to increase the country’s prestige in this sport. This success has a lot of ingredients and it’s really difficult to list them all quickly.”

- How do you explain the lack of success for pre-Olympics favorite Musa Mogushkov, who lost in the first round?

“That sort of thing happens. When someone joins the favorites, then there’s always a lot of pressure on him and it’s not so easy to deal with that. In those situations you often get stressed and it’s easy to burn out. That’s happened often enough with other athletes, and he became one of those who are unlucky.”

- What made you believe in Ivan Nifontov, who came to the Olympics after a serious injury and ended up winning bronze?

“I’ve known him since the start of 2009 and I watched him training every day, followed him at competitions. He proved with his results that he’s stronger than his rivals and forced his way into the Olympic squad. And here in London he put in some brilliant work.”

- When you were putting the squad together, did any situations arise when people tried to make you take an athlete who you really didn’t want to take to the Olympics?

“I felt no pressure at all because everyone knows my principles at work. There’s no sense in trying to pressure me.”

- And now for the big question - are you planning to stay with Russia?

“I hope so, I want it. Anything can happen, but I’m happy working in Russia, I like the support they give me here. The whole team’s pleased to work with me and I don’t see a reason to split up with them, to cut short my projects. However, we need a little time to discuss all the issues. Not everything depends on me. In 16 days’ time we’ll hold talks and then everything will become clear and definitive.”

- But would you like to stay for the whole Olympic cycle, right up to the Olympics in Rio de Janeiro in 2016?

“Of course. I really want to work with the team at the Olympics in Rio.”

- What do you think - will the Russians and Koreans remain the leaders in judo until the next Olympics? Have the Japanese lost the lead in the sport they created?

“Yes, Japanese judo is experiencing something of a crisis at the moment. They’ve made a lot of mistakes and they absolutely need change, although I don’t want to talk about other people’s problems. It’s better to talk about how we can hold on to the leading positions. But for that we need to work out a new approach to work, new projects, a new training system and give ourselves a new challenge.”