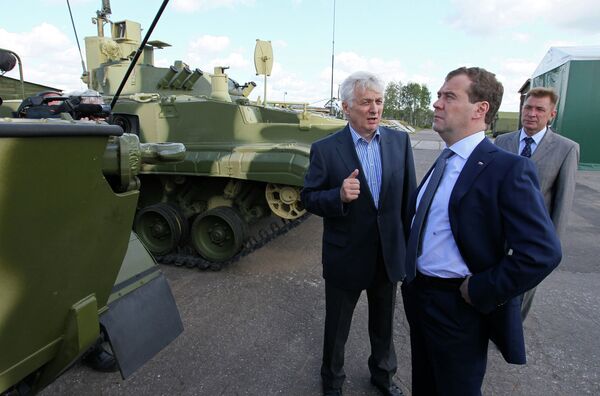 Prime Minister Dmitry Medvedev called for an increase in the pace of Russian rearmament on Monday during a visit to an arms-making plant.

Prime Minister Dmitry Medvedev called for an increase in the pace of Russian rearmament on Monday during a visit to an arms-making plant.

"We need a different pace of rearmament, which is especially important considering the adoption of a unified system of pricing for weapons," Medvedev said.

The prime minister added that recent decisions by the government to seek procurement of complete defense systems instead of disparate parts is a key part of improving Russian rearmament. He cited the situation with Iskander missile systems, which until recently have been delivered by separate elements rather than in complete sets.

“So our decision on the need for these weapon systems to be delivered in complete sets is absolutely right.

Iskander M missile systems are superior to their foreign counterparts and should become the core of the Ground Forces missile units, Medvedev said.

“The Iskander M is without doubt one of the most effective systems in its class and, in our opinion, is ahead of foreign analogs,” he said.

"We have invested over 24 billion rubles in modernizing and building production capacity for series production of Iskander M missiles," Medvedev said.

The enterprises concerned will invest another 16 billion rubles of their own funds in the program, he said.

Iskander M, which is in production for the Russian armed forces, is a rapid response ballistic missile intended for precision strikes on high-value targets such as command posts, airfields, air-defense sites and opposing missile systems.

Russia has previously threatened to deploy Iskanders in the Kaliningrad exclave if NATO deploys anti-missile defense systems in Poland.