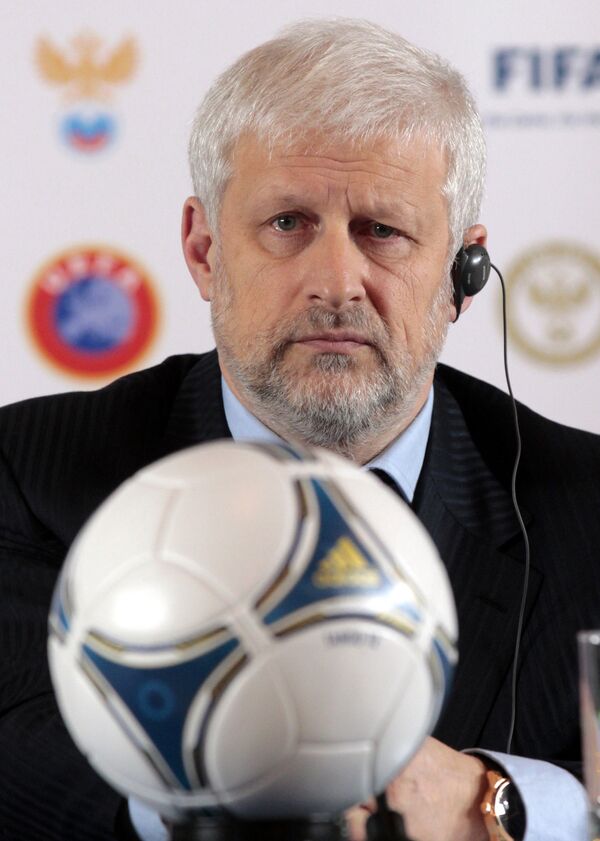 © RIA Novosti . Aleksey Danitshev
/
Go to the photo bank
Subscribe
The head of the Russian Football Union resigned from his post Monday with an apology to fans for the national team's group stage exit at Euro 2012.

The head of the Russian Football Union resigned from his post Monday with an apology to fans for the national team's group stage exit at Euro 2012.

Sergei Fursenko's resignation throws into doubt the process of choosing a successor to coach Dick Advocaat, who left after the tournament.

"I have made a decision that was hard for me, to leave the post of president of the Russian Football Union," he said at a meeting with Vladimir Putin.

"I want to apologize to the supporters for this result," Fursenko said.

"It's a pity because the team was very strong, a very good job was done by Dick Advocaat."

Fursenko's deputy Nikita Simonyan will serve as acting president of the union.

Fursenko, 58, succeeded Vitaly Mutko in February 2010 after his predecessor was made sports minister, and three months later oversaw the hiring of ex-Rangers coach Advocaat.

Expectations were high Russia could repeat their run to the Euro 2008 semifinal after they entered the tournament on a 14-game unbeaten run and started it by beating the Czech Republic 4-1, but a 1-1 draw with co-hosts Poland and then a surprise 1-0 defeat to Greece sent the Russians home.

During his time in charge, Fursenko switched the Russian leagues to a spring-autumn schedule to synchronize Europe's major leagues.

Despite containing a three-month winter break, the new calendar attracted criticism that Russia's pitches were unable to cope with games in sub-zero conditions in December and March.