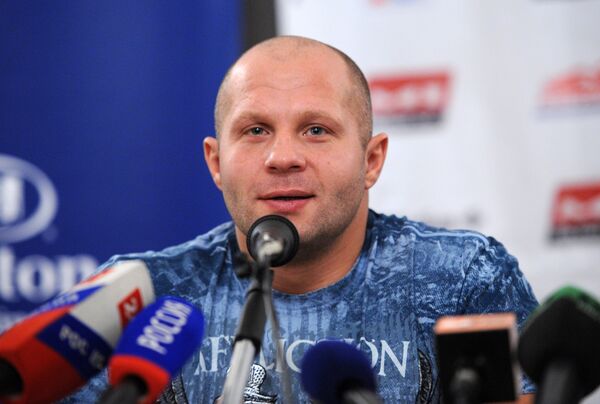 It took Emelianenko just 44 seconds to stop Rizzo, putting the Brazilian on the ground with a serious of punches before finishing off his opponent with more strikes to the head.

Emelianenko, 35, earlier announced that he is likely to retire after the fight against Rizzo, which moved him up to a 35-4 career record, but did not comment after the match.

Elsewhere on the card, Jeff Monson of the United States scored a first round victory over Russia's Denis Komkin.

Monson easily avoided Komkin's attempt to choke him before successfully applying the same technique himself to win by submission.

Another Russian fighter, Musa Khamanaev, snatched the lightweight belt from Germany's Daniel Weichel early in the first round. Khamanaev implemented a prepared heel hook, and Weichel submitted and left the ring limping.

The fight was stopped after the third round as Gugenishvili's face was bleeding severely. Exhausted after spending the most of the second round on the ground, in the third the Georgian failed to finish off Garner on the ground and then suffered a series of heavy punches.

Emelianenko, 35, is a multiple world heavyweight champion and went undefeated for almost a decade until June 2010, earning the nickname "The Last Emperor" for this record.

After that he suffered three losses in a row, to Brazilians Fabricio Werdum and Antonio Silva and then to American fighter Dan Henderson, which made him take a month break to make a decision on his career.

He chose to mount a comeback to halt the losing streak, beating Monson on a decision in November in Moscow and then knocking out Japan's Satoshi Ishii in Tokyo on New Year's Eve.