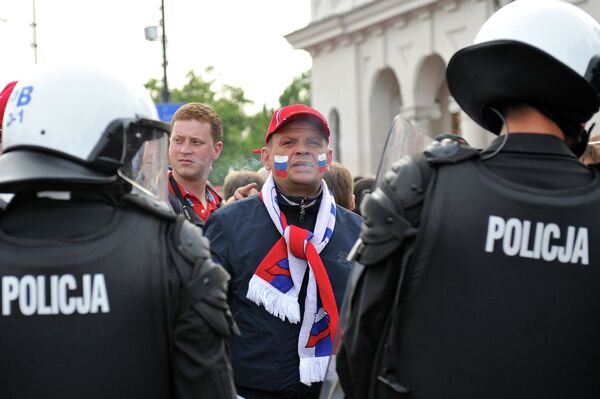 Violence flared during a march through the city by Russian fans ahead of the Euro 2012 match between the two nations at Warsaw's National Stadium.

Around 7,000 Russians took part in the march to celebrate their country’s national holiday, the Polish ambassador to Russia, Wojciech Zajaczkowski, said Wednesday.

The trouble was started by Polish hooligans, Zajaczjowski said.

“During the march incidents took place that were provoked by Polish pseudo-fans,” he said.

“The police reacted decisively and professionally.”

Of the 184 arrested, 156 are Polish and 25 Russians, Warsaw police said in a website statement. One Spanish national, one Hungarian and one Algerian were also held in connection with the disturbances.

Ten people were injured, including seven Poles, two Russians and a German. Of those, seven Poles and one Russian were kept in hospital overnight, regional governor Jacek Kozlowski said.

A further 150 people were treated for minor injuries, he said.

Police fired warning shots during the march when Polish fans hurled bottles, stones and flares at them, and the police also deployed a water cannon.

Incidents at the march led to 56 arrests, the police said, before trouble spread to nearby streets, where the rest of the arrests were made.

At the match, Russian supporters unfurled a huge banner with the slogan “This is Russia” depicting Dmitry Pozharsky, a knight who defeated an invading Polish force in 1612.

The scuffles follow trouble Friday when some Russian fans assaulted Polish stewards after Russia's 4-1 win over the Czech Republic in Wroclaw.