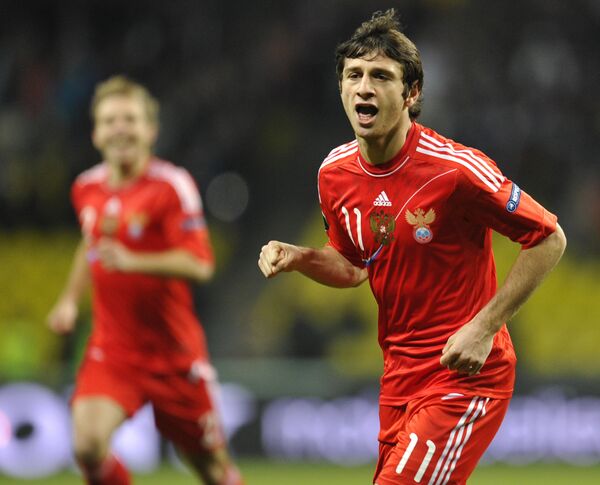 Two goals from Alan Dzagoev and a late stunner from Roman Pavlyuchenko helped Russia throw down a marker at Euro 2012 on Friday with a 4-1 dismantling of the Czech Republic.

With co-hosts Poland drawing 1-1 with Greece in the tournament curtain-raiser earlier Friday, the Russians shoot to the top of Group A and become the team to beat.

CSKA Moscow midfielder Dzagoev, 21, put the Russians ahead on 15 minutes, smashing home a rebound off the post from an Alexander Kerzhakov header.

The second came less than ten minutes later as midfielder Roman Shirokov chipped deftly over Petr Cech after a through ball from Andrei Arshavin.

The Czechs pulled one back early in the second half through Wolfsburg striker Vaclav Pilar, who calmly rounded Vyacheslav Malafeev and slot home from a tight angle.

Roman Pavlyuchenko came on for Alexander Kerzhakov on 75 minutes, and the former Tottenham man immediately set up Dzagoev for his second before firing in a stunning fourth for his team a minute later.

It was a performance on a parallel with Russia's victory over the Netherlands at Euro 2008, and hails the arrival on the international scene of CSKA Moscow's Dzagoev, who has for years been mooted as a star of the future.

Russia's next game is Tuesday against Poland in Warsaw, while the Czechs face Greece.