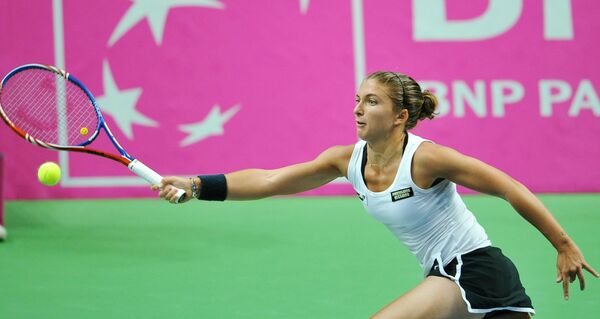 Asked whether the doubles had left her drained, she said: "If I am very relaxed, it will also be bad. I'm feeling good now."

The win had motivated her for further success, she added.

Errani, seeded 21st for the tournament, upset three higher-ranked players on her way to the final of the clay-court tournament, and scalped former French Open champions Svetlana Kuznetsova and Ana Ivanovic.

Sharapova is wary of Errani despite the Italian's lowly status, the Russian said Friday.

Errani has only won tournaments at the WTA International level, the lowest tier of the women's tennis tour, but won three of them this season, all on clay.

"We've never even played, but I know that she is a very dangerous opponent. Firstly, she's playing here in the final, which already speaks for itself. Second, she's having a great clay season," Sharapova said.

The Russian has won all the Grand Slam tournaments bar the French Open, but her previous success does not make her first final at Roland Garros any less special, she said, adding that it had been her dream "for years".

Reaching the final ensures Sharapova takes the world No. 1 spot from Victoria Azarenka for the first time since a long injury layoff in 2008 and 2009 saw her drop out of the top 100.