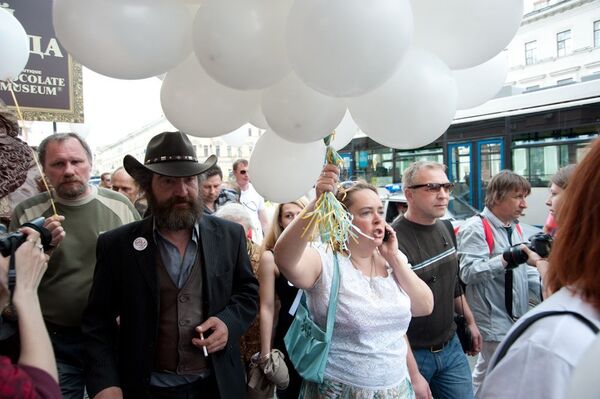 Five opposition activists were detained in Arts Square in the center of St. Petersburg during their protest stroll, local police reported on Sunday.

“Five citizens were brought to the police station for administrative offences because they breached urban amenities regulations,” a police spokesman said, adding that no unauthorized public rallies were held in the city on Sunday.

Opposition leader Olga Kurnosova confirmed that five people had been detained in Arts Square while other opposition activists stayed near the Pushkin Statue and continued their stroll.

Protest walks have been held in St. Petersburg for the second consecutive week. Initially, opposition activists gathered in the public garden on St. Isaac’s Square where they socialized, played games and sang songs, peacefully protesting against the authorities.

They further moved to the Alexander Garden near the Admiralty when the public garden near St. Isaac’s Square was closed for repairs and were eventually forced by police to move to the Pushkin Statue in Arts Square.

Over a hundred people, including famous musicians, artists, and also film director Alexander Sokurov, strolled across St. Petersburg from St. Isaac’s Square towards Nevsky Prospect on May 20.

The protest walk with writers in Moscow on May 13 gathered some 2,000 participants according to the police while the organizers put the figure at over 10,000.

The idea of a "protest walk" was suggested by writer Boris Akunin who actively participated in protests against the alleged fraud at the parliamentary elections in winter.

The Moscow protest walk took place after the police’s tight response to the March of Millions held on the eve of the inauguration of Vladimir Putin for a third presidential term, in which dozens of people were detained.