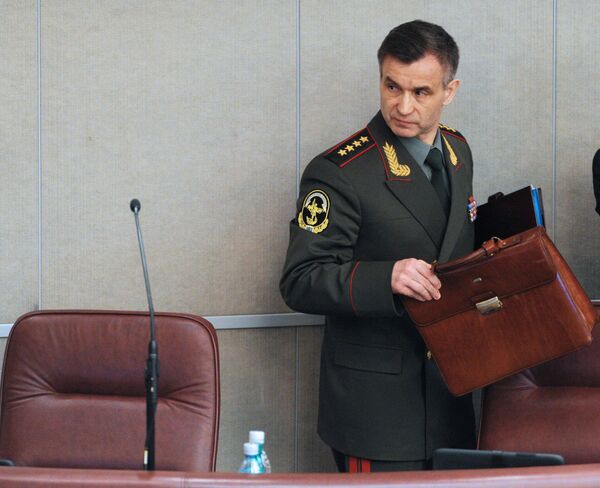 Rashid Nurgaliyev, who headed the Russian police since 2004 and supervised a largely unsuccessful reform of the force, was replaced in the new government with Moscow police chief Vladimir Kolokoltsev on Monday.

Rashid Nurgaliyev, who headed the Russian police since 2004 and supervised a largely unsuccessful reform of the force, was replaced in the new government with Moscow police chief Vladimir Kolokoltsev on Monday.

No new job was announced so far for Nurgaliyev, who was called “the most unpopular minister” by Alexander Khinshtein, a State Duma lawmaker with the ruling United Russia and his ardent critic.

However, Mikhail Fedotov, head of the presidential rights council, urged “not to blame Nurgaliyev for the sins of the system” and praised his attempts to reform the Russian police, known for its corruption and frequent abuse of authority.

Nurgaliyev, 55, served in the KGB and its successor, the Federal Security Service, between 1981 and up until he was moved to the Interior Ministry in 2001, later appointed to head it by then-President Vladimir Putin.

A staunch Putin loyalist, Nurgaliyev weathered numerous media storms during his time in office, including calls for his dismissal after police officer Denis Yevsyukov went on a shooting spree in a Moscow supermarket in 2009, killing two.

In 2011, then-President Dmitry Medvedev launched a broad police reform, slashing the force from 1.2 million to its current 1 million through reevaluation tests in an attempt to cull corrupt and incompetent officers.

However, trust in police remained low, with only 18 percent thinking it improved as a result of the reform, compared to 72 percent who reported no improvement and 10 percent undecided, according to a survey by independent pollster Levada in February.

Police were rocked by another string of scandals connected with abuse of authority in recent months, starting with the March incident in Tatarstan, where a detained man was sodomized to death with a champagne bottle at a police precinct.

Nurgaliyev’s replacement, Kolokoltsev, 51, a native of Pensa region, served in the Moscow police from 1982 to 2001, mostly at various departments combating organized crime.

He moved to the Central Federal District police in the early 2000s, but returned to Moscow in 2009, when Medvedev made him head of the capital’s police force replacing Vladimir Pronin, sacked over Yevsyukov’s killing rampage.

Kolokoltsev, whom Khinshtein attested a “strict professional,” is credited with attempting to improve the city police’s efficiency and transparency, revitalizing its public council and personally intermediating with protesters during the Manezh Square riots in 2010.

However, he made no public attempt to stop a police crackdown on mostly peaceful anti-government protests ongoing in Moscow since early May.

No replacement was announced for the post of Moscow's police chief as of Monday.