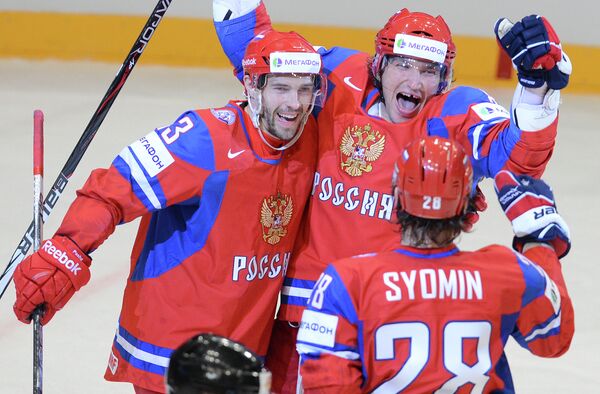 Russia forward Alexander Semin has defied his NHL critics after helping Russia to victory in the world championship final, he said Monday.

Russia forward Alexander Semin has defied his NHL critics after helping Russia to victory in the world championship final, he said Monday.

Russia trounced Slovakia 6-2 in Sunday's final to win the world hockey championships, helped by two goals from Semin, who finished the tournament with five points in three games.

This season the 28 year old averaged his shortest ice time since joining the Washington Capitals in 2006 with 16 minutes 47 seconds, and will be a free agent in the summer.

Semin decided to leave after the team told him not to count on any more ice time if he stays, his agent Mark Gandler was quoted as saying by ESPN Magazine earlier this month.

"That was the club and this is the national team. Different players, different game," Semin said Sunday.

"What is said about me doesn't worry me. I don't read the press. These are people who never came on the ice and never played, and who write. Downswings, rises and falls happen."

"This is really super. The dicipline is perfect. All the guys are friendly," he said.

"In Bilyaletdinov's team the most important thing to play strictly in defense, to lose the puck less and to play more in the zone. To play at a hundred percent always."

The triumph was Russia first at the world championships since 2009, when the Russians defeated Canada 2-1 in the final in Bern, Switzerland, and the country’s fourth title since the collapse of the Soviet Union.

Semin has scored 197 goals and 211 assists in 469 NHL appearances, all for the Capitals, where is the fifth-leading all-time goalscorer.