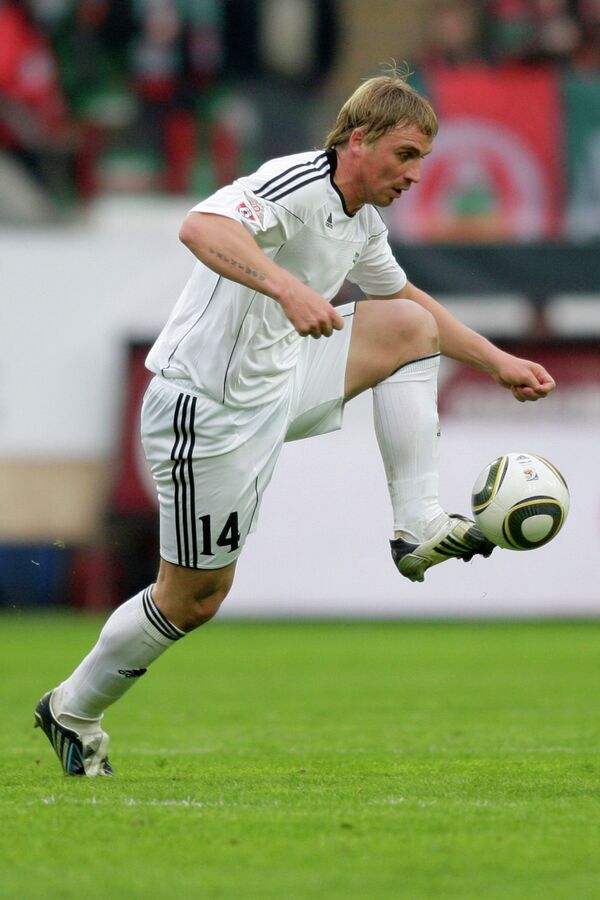 © RIA Novosti . Anton Denisov
/
Go to the photo bank
Subscribe
Former Blackpool striker Sergei Kornilenko set up both goals as Krylya Sovetov hauled themselves out of the Russian Premier League’s relegation playoff places with a smash-and-grab 2-0 win at Krasnodar.

Former Blackpool striker Sergei Kornilenko set up both goals as Krylya Sovetov hauled themselves out of the Russian Premier League’s relegation playoff places with a smash-and-grab 2-0 win at Krasnodar.

With one game remaining, Krylya are 12th in the league, two points and one place ahead of Rostov in the first of the two playoff places. Krasnodar remain ninth.

Kornilenko, playing despite testing positive for a banned substance in March, beat two defenders before sending in a cross that midfielder Anton Bober slotted home to open the score in Krylya’s favor on 43 minutes.

Krasnodar dominated possession throughout and posted 17 shots to Krylya’s eight, but missed several opportunities to score.

The most notable miss came when Krasnodar left-back Dusan Andjelkovic crossed for Yura Movsisyan, who was unable to connect, before Marcio blazed over the bar on the rebound, with the goal wide open as Krylya goalkeeper Sergei Veremko lay on the ground.

A clash of heads at a corner on eight minutes saw Krylya’s Belarusian international center-back Dmitry Verkhovtsev stretchered off as three other players lay hurt.

Earlier Monday, a volley from Evgeny Balyaikin ensured that FC Tomsk and Spartak Nalchik shared the points in a 1-1 draw between the two teams already relegated from the Russian Premier League.

In Sunday’s games, Dynamo Moscow drew 2-2 with city rivals Lokomotiv, while Spartak Moscow beat champions Zenit St. Petersburg 3-2 away and Guus Hiddink’s Anzhi secured a place in the Europa League with a 3-1 win at home to Rubin Kazan.

Later Monday, Krasnodar host Krylya Sovetov, who can leave the relegation playoff places with a win.

On Tuesday, CSKA Moscow can retake second place from Spartak with a point at home to Dan Petrescu’s FC Kuban.