Russia Hunts for Gold in Scandinavia 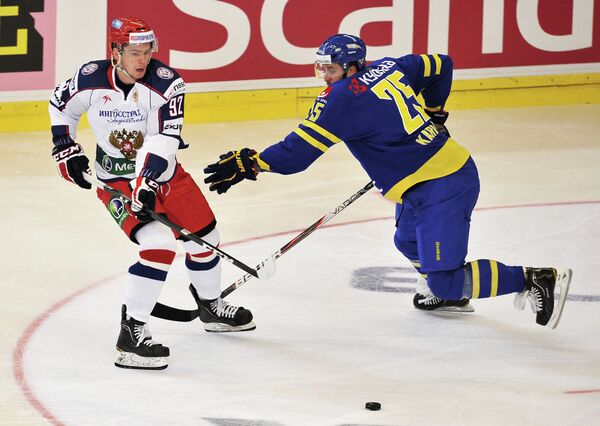 © RIA Novosti . Ramil Sitdikov
/
Go to the photo bank
Subscribe
Russia will chase its first ice hockey world championship title since 2009 when the tournament starts in Finland and Sweden on Friday.

Russia will chase its first ice hockey world championship title since 2009 when the tournament starts in Finland and Sweden on Friday.

As top seed, Russia has avoided reigning champions Finland, as well as the United States and Canada in the group stage, but will revive long-standing rivalries with Sweden and the Czech Republic.

With the Russians resting before they take on 2011 finalist Sweden on Saturday, the opening day pits Finland against a Belarus team packed with KHL talent, while Sweden takes on Norway in an all-Scandinavian clash.

Sunday boasts two big draws as the United States face Canada in a much-anticipated match-up, before Sweden plays the Czech Republic as the 2011 losing finalist plays the 2010 champion.

The Czech team’s games will be an opportunity for Calgary Flames fans to see their team’s new signing Roman Cervenka in action after he signed a $3.8 million one-year deal Thursday.

Others, such as Nashville Predators forward Alexander Radulov and Washington Capitals wing Alexander Ovechkin, are absent due to the NHL playoffs.

Defenseman Anton Belov, an international regular, will also be missing after he shocked the hockey world by testing positive for a banned stimulant during his team Avangard Omsk’s Gagarin Cup final series with Dynamo Moscow last month.

Bilyaletdinov said he was disappointed to lose Belov and Maxim Rybin, a SKA St. Petersburg player serving a suspended ban after testing positive.

“Belov is a loss for me. I was counting on him. There’s practically a 99 percent chance that the player would have been in the national squad. What’s happened is a real loss. Rybin was also a candidate for the national team,” he said this week.

Russia has a relatively smooth start to its pool games, all of them to be held in Stockholm, and will be the favorite for matches with Latvia, Norway, Germany and Denmark, although Russia struggled to a 2-1 win in a warm-up match with the Latvians last week.

The first big test comes May 11 when Russia meets Sweden in a rematch of last Saturday’s Euro Hockey Tour warm-up encounter, which the Russians won 4-2. Two days later, Bilyaletdinov’s men face the Czechs, who beat Russia 2-1 on Sunday in the same event, albeit on home ice in Brno.

The Euro Hockey Tour fixtures are a poor guide to the team’s true form because so many players are absent due to NHL commitments, former Russia coach Yuri Novikov told RIA Novosti on Wednesday.

“We should clearly understand that the world championships and especially the Olympics have no connection whatsoever with the Euro Hockey Tour, because the success depends on the squad, whether we like it or not,” he said.

The last game against Italy is likely to be a win for the Russians, as the last time Italy avoided relegation at a world championships was in 2007.