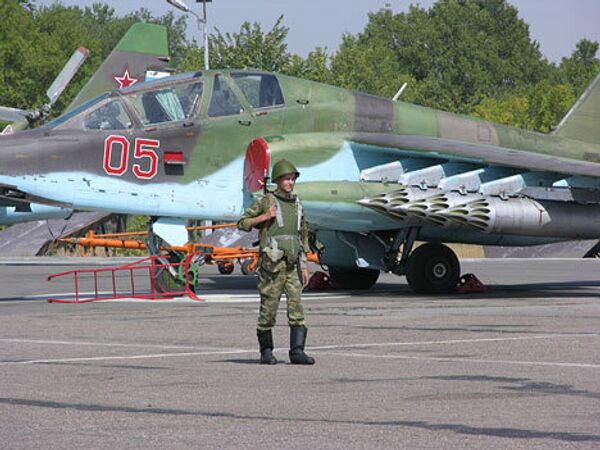 Russia signed a deal with Kyrgyzstan on Tuesday agreeing the rent Russia will pay for using military facilities in that country.

The deal was signed following a meeting between Defense Minister Anatoly Serdyukov and his counterparts from Kyrgyzstan and Tajikistan in Beijing on Tuesday, Serdyukov’s spokeswoman Lt. Col. Irina Kovalchuk said.

“During a meeting with Kyrgyz Defense Minister Major General Taalaibek Omuraliev a protocol on rent compensation for the use Russian military facilities in Kyrgyzstan was signed. Work to resolve the problems which occurred with payables on rent was completed,” Kovalchuk said.

“The signing of the protocol legally sets out the debt,” she said

The Russian and Tajikistan Defense Ministers sides signed an intergovernmental agreement on Tajikistan citizens attendance in the educational institutions of the Russian military.

“It creates the necessary legal and regulatory framework for the training of Tajikistan citizens in the Suvorov schools and cadet corps of Russian Defense Ministry,” Kovalchuk said.

Serdyukov is in Beijing to attend a meeting of Defense Ministers of the Shanghai Cooperation Organization, which will be held on Tuesday.

During his visit to Moscow in February, Kyrgyzstan’s President Almazbek Atambayev criticized Russia for not paying the rent for its military base in Kant and questioned the rationality of allowing Moscow to keep a base on Kyrgyz territory.

Kyrgyz Prime Minister Omurbekh Babanov said on Tuesday the country’s authorities were planning to decide whether to extend the U.S. lease of the Manas air base near Bishkek by taking into account the opinion of partner states within the Organization for Security and Cooperation in Europe (OSCE).

The United States began operations at the Manas base in 2001 in the aftermath of the 9/11 attacks to support military operations against the Taliban in Afghanistan. It remains a key supply facility for the ongoing military campaign there.

When Kyrgyz President Almazbek Atambayev assumed his post last November, he stated that Kyrgyzstan would not prolong the lease contract with the United States, which expires in 2014, saying that he did not want a third country carrying out a retaliatory strike against the civilian airport. Pentagon officials have since been trying to persuade the Kyrgyz authorities to change their mind.