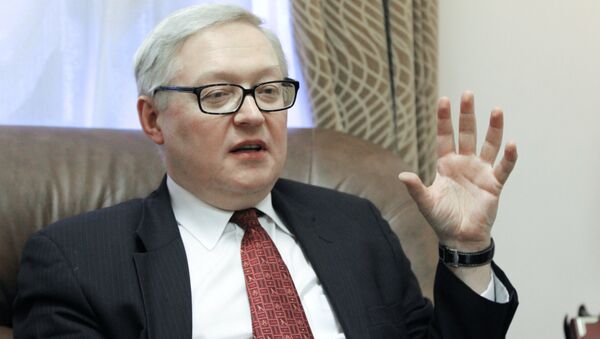 Russia has disassociated itself from words in a G8 statement that singled out homosexuals as a separate group whose rights need to be protected, Russian Deputy Foreign Minister Sergei Ryabkov said on Friday.

Russia has disassociated itself from words in a G8 statement that singled out homosexuals as a separate group whose rights need to be protected, Russian Deputy Foreign Minister Sergei Ryabkov said on Friday.

“We have repeatedly said that the Russian Federation condemns any forms and manifestations of discrimination on any grounds. We proceed from the assumption that a ban on discrimination in international legal acts on human rights is general and relates to all people without exception,” Ryabkov told journalists.

“These norms are more than enough. All states should thoroughly observe them,” he said in Washington that hosted G8 foreign ministerial meetings on April 11-12.

“In this connection we cannot agree with attempts to artificially single out this category of people as an independent group claiming that its rights and interests should be specially protected,” he said.

Ryabkov also hit out at attempts to impose homosexual views on society.

“We believe aggressive promotion of a certain behavior and system of values that may insult the feelings of a considerable part of society under the pretext of protection of so-called sexual minorities’ representatives is inadmissible,” he said.

“Therefore we have disassociated ourselves from relevant wordings in the G8 Foreign Ministers Meeting Chair's Statement,” Ryabkov said.

The words in the G8 Foreign Ministers Meeting Chair's Statement that Ryabkov spoke about read: "The Ministers reaffirmed that human rights and fundamental freedoms are the birthright of all individuals, male and female, including lesbian, gay, bisexual or transgender individuals."

"These individuals often face death, violence, harassment and discrimination because of their sexual orientation in many countries around the world," the statement said.

Russia's viewpoint is reflected in a separate phrase under a footnote: "The Russian Federation disassociates itself from this language given the absence of any explicit definition or provision relating to such a group or such persons as separate rights holders under international human rights law."