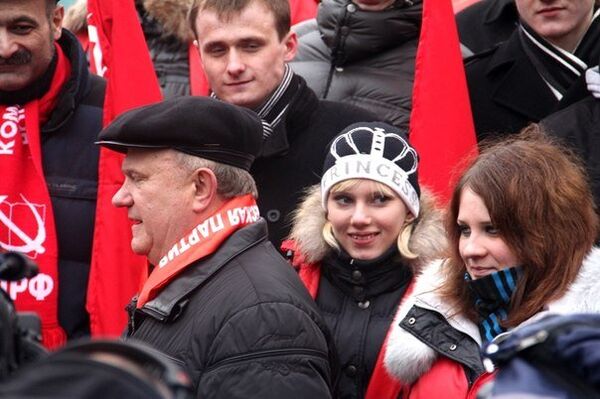 Russian communists have held on Saturday afternoon a rally in Moscow against the projected deployment of a NATO supply base on the Russian territory.

Russian communists have held on Saturday afternoon a rally in Moscow against the projected deployment of a NATO supply base on the Russian territory.

Supporters of the Communist Party with red flags and banners as well as left-wing activists gathered on central Pushkinskaya Square on 12:00 Moscow time to hold the authorized rally with a declared number of participants at 2,000 people.

The Kremlin's intention to allow NATO to set up a hub for Afghan transit operations in the Volga region city of Ulyanovsk has triggered mass protests amid claims the deal would undermine Russia's national interests and security.

The Russian authorities have repeatedly dismissed concerns over the deployment of a NATO transit hub in the middle of the country claiming it would involve only the transport of non-lethal cargoes, which would be subject to customs checks.

The rally was also dedicated to recent parliamentary and presidential elections in Russia and the country's accession to the World Trade Organization.

Communist Party leader Gennady Zyuganov said in his speech at the rally that Russia's WTO entry would kill local aviation and manufacturing industries.

"We should not help our farmers who writhe in agony, should not develop our hi-tech technologies under new WTO rules but will have to raise tariffs to the European and world levels. This means termination of [our] aviation and ... manufacturing industries," Zyuganov said.