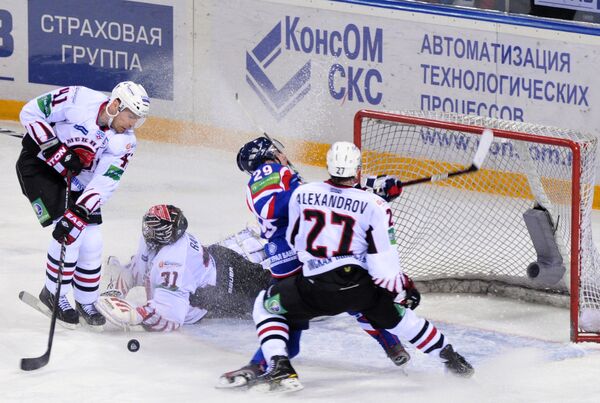 Avangard survived waves of attacks from regular season champion Traktor to win 1-0 in a tight fifth game in Chelyabinsk.

Defenseman Anton Belov had been engulfed in controversy after kicking an opponent on the ground in the last game, but was the hero Friday as his 14th-minute strike sent Avangard into its first Gagarin Cup final.

The Omsk team will play Dynamo, who knocked out pre-series favorite SKA St. Petersburg with a 4-0 shutout series win, capped with a 6-1 thrashing in Moscow on Tuesday.

Both teams attacked early on, but Avangard gained the breakthrough on 14 minutes when Belov struck, with help from Martin Skoula and Alexander Nesterov.

The visitors defended deep from then on, and were 26-8 down on shots in the second and third periods.

The KHL regular season champion has never reached the Gagarin Cup final, a fate that befell Avangard last year when the Omsk team was knocked out in the Eastern Conference semifinal.